How to connect a mixer to an audio interface 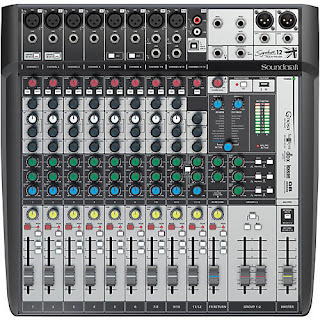 Hello and welcome to this week's article!
Today we're talking about a problem that probably many musicians have encountered: how to connect a mixer to an audio interface, for live or studio purposes.

Today there are in commerce several types of mixers with audio interface function, capable of transfereing the data directly to our DAW without passing through an audio interface: some of them can even split every single channel to a separate audio track, while others can export only to a left and right track.

The reality, though, it's that 80% of the mixers around doesn't have an usb out, therefore we will need to plug them somehow to our audio interface in order to record through them.

Why would we need to pass through a mixer?
Simple: to use more microphones than the inputs in our audio interface, for example we can use an 8 track mixer to mic a live drumkit (or a live band, or our rehearsals if we feel fancy), make a relative mix on in and connect the left and right output tracks to our audio interface to record it in our daw.

What we need in our interface it's basically just 2 TRS line level inputs, so we need to go with a regular jack from the 2 MAIN OUT outputs of the mixer (left and right) into the 2 line inputs of the audio interface.

Now we need to take care of the gain staging: before turning on the mixer, set the gain knob on each track to zero and the "main mix" level to unity (12 'o clock).
Once the mixer is on, slowly rise the gain knobs of each track until the recorded levels arrives at around 0db in the output meter, but without clipping.

Now take a look at your DAW and adjust the gain knob in the audio interface to make sure the input level is not too low nor too high. Once you find the optimal level, that is not clipping but that can record everything clearly, the gain staging is done

So far we have talked about connecting a mixer to a 2 input audio interface, but there are mixers that have also separate audio outputs, and audio interfaces with many

Now you're ready to record, enjoy!

Today we are talking about a legacy Boss pedalboard that was launched in 2001 and that represents a big leap forward in Boss flagship pedalboards (after the GT-3 and GT-5), stepping up the COSM modeling technology that Boss has been implementing in its products for at least 20 years: the Boss GT-6.

I have owned this pedalboard from around 2002 to around 2006; it was different times, times in which you couldn't hook up your pedalboard to the pc as an usb audio interface and you had to navigate through complex menus and sub menus mutuated from the '90s excruciating rack experience, times in which no one used to consider important the "user friendliness".

The pedalboard is very rich in functions and still today (despite at least other four new models that came out in the following years) represents a really complete solution for the live guitarist: it lets you hook up to your amp with the "4 cables mode", it has an expression pedal and 7 programmable footswitches, plus a very wide (even for today's standards) array of amp models (30) and 340 effect programs, plus it's built (and heavy) really like a tank.

How does it sound? It depends on what you need. The effects are very precise, "digital", but in a good way, meaning not "dirty sounding", and the many knobs really lets you edit them in depth, plus the number of effects is incredible, in facts besides the classic reverbs and modulations this pedalboard features a full fledged guitar synth with everything, from strings to arpeggiators to bass emulator, pitch shifting and so on. If you have a good tube amp with a preamp you like, this pedalboard still today can cover your effect needs for ages to come.
If we're talking about the preamp section, instead... The sounds were not good. Especially with the high gain, you could really tell that it was early 2000s emulation, they were practically unusable back then, and now even less.

This pedalboard left me all in all with good memories, I have played some nice gig with it and used it to record, before moving to the flexibility of Vst effects, and if you are a live musician that needs many effects in a reliable casing and you happen to find it at a cheap street price it's definitely worth a try.


- 340 effects programs—more than any other pedal in its class!


- EZ Tone feature for creating custom patches based on 30 templates


- Built-in Expression and Control pedals for realtime control of effects

3 tips to handle the low end in our mix / master 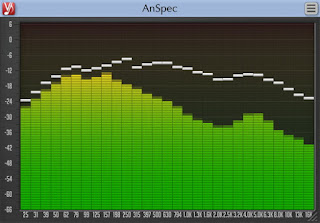 Hello and welcome to this week's article!
Let's start by saying this: the low end frequencies are the most inconsistent ones in a mix; they are the ones that requires more energy to be reproduced, and the bigger the speaker, the better they will sound.
The fact that a song need to sound good from any type of source (from the 100k high end tube system to the tiny speaker of our phone or laptop) poses a huge challenge to any mixing and (especially) mastering engineer, and it's virtually impossible to create something that sounds perfect from any source, also because we use when mixing (ideally) good reference monitors.


- Hi pass the useless low end rumble: not all the low end is good, there are often useless subsonics below the 50hz that are generated by the breathing in the condenser microphone, or by the singer accidentally touching the mic stand with the foot and so on, that will eat up headroom in your mix without adding anything to the song: better to cut them out.

- Use a spectrum analyzer (click here for a dedicated article with some free download): in this case you can visually see what sometimes is hard to hear, and you can compare the spectrum of your favourite songs with the one you're mixing, to find out where is the low end content and where it should be.

- Use multiple sources, each one will reveal a different aspect of your mix, this way you can perform some troubleshooting before finalizing a song (click here for an article about testing our mix on various sources). 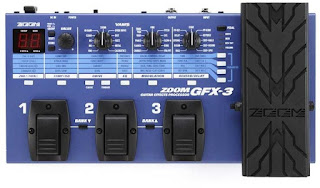 Hello and welcome to this week's article!
Today I'm proceeding with my walk through the memory lane by reviewing another one of the gadgets I have owned during the years, this time a pedalboard by Zoom, called GFX-3.

Back then, in the mid 2000s I had just switched from a rack system to a head+cabinet one, I was tired of the wirings, patchings and so on, and I wanted the simpliest solution possible, so I needed something with these features:

- with an in-built tuner


I looked around and this small Zoom one seemed the best choice, but I didn't consider a fundamental thing: I needed something that would allow me to use only the effect section going into the loop, so I could use the amp section of my tube amp (I think it was a Randall or a 5150 back then), and I didn't want to pass through the multi effect preamp section; unfortunately I realized this only some day after I bought it.

The unit was very solid and with a very simple interface, it was clear that after going through the '90s in a direction of complicating the interfaces to the impossible, the manufacturers were trying to move back towards a much simplier approach, and this user friendliness luckily has remained in most of the multi effects still today.
The Zoom Gfx-3 offered (and still offers, if you happen to find it second hand) a selection of 60 presets plus 60 user ones, in which you can choose among 10 amps and 10 distortion types, several cabinets and a 50 effects, with a maximum chain lenght of 8 effects.
Sound wise the effects were pretty good: they tried to model the analog delays and reverbs by making them sound warmer (that in practice it means less hi-fi, a bit dirtier and more saturated) and they were very pleasant and usable, but the preamp section was good only in the department in which these budget multi effect shines: cleans and overdrives.
The hi-gain tones, instead, were basically unusable: fuzzy, thin and extremely "digital sounding" meaning that they sounded like sand paper.

Eventually I stuck with it for a while by applying the effects before entering the preamp of my amp head, but this way the tone was bad (imagine having the delay BEFORE the distortion) and there was no other way to use this unit, therefore, since I wanted to use the amp's preamp section, I decided to sell it.

What can I say? As many Zoom products, also this is very cute looking, it had a very affordable price, a nice interface and a lot of features, but if we talk about preamp tone, at least this one didn't sound particularly well.

Hello and welcome to this week's article!
Today we're proposing the version 2019 of another 5 years old article: the best 5 Vst plugins for mastering that I have written in 2014, and this time we're focusing on the free ones!


1) Minimal System Group Stereo Buss Compressor: this cute little buss compressor has everything you need (and nothing you don't) to glue the mix in the mix buss or to shave the transients a bit in the mastering buss.

2) Blue Cat Triple Eq: this is a very good three band semi-parametric eq that offers no latency, +-40db range for each band, and it works very well to give the last surgical touches to our master, plus it has an essential mid-side function.

3) Polyverse music Wider: this is a very simple yet extremely effective tool; Wide is a stereo enhancer with just a percentage control. You can go up to 100% in order to achieve a fully stereo, phase coherent version of a mono sound, but you can also increase it up to 200% in order to have an exaggerated, larger than life sound!

4) Loudmax Limiter: this is probably the most beloved free mastering limiter, and for a reason: it sounds good. It's very simple: you just dial the output level, then you lower the threshold (thus increasing the gain) until you reach the desired gain reduction level.

5) Youlean Loudness Meter: a very complete metering tool to keep an eye on the dynamic range of our song. It's fundamental to nail the right loudness for the platform we intend to play our song on.