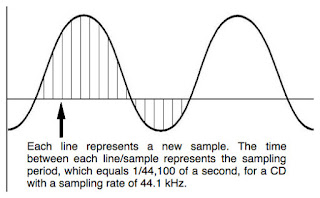 Hello and welcome to this week's article!
Today we are goind to add an extra part on our article about Bit Depth an sample rate:
can actually record at higher sample rates damage your final result? Let's find out.

As we have already seen, the sample rate is, put simply, how fast samples are taken.
For sample you can imagine the single photos that put one after the other create a movie; in our case we are talking about audio snapshots.
The cd standard is 16 bit and 44.100hz, although there are also formats today that allows higher standards (but they are not very popular), so for long time the rule of thumb has been "record at 44.100, 24 bit, and then scale down to 16 bit".

With the technology improving and the adc (analog to digital converters, the part of the audio interface that takes the analog signal and turns it into digital signal) getting better and better today many studios record at 48khz, 96khs and so on.
But why do they do it considering that then you will have to scale it down to 44.100hz? Simple, for the same reason you do record at 24bit (or why you take photos in raw with your reflex before editing them): to have as much information as possible, to mix it and then to scale down the final result.

Should you use higher sample rates than 44.100hz or 48.100hz?
It depends on your adc, which means it depends on your audio interface.
The quality of your converters depends on the quality of your audio interface, and if you have an audio interface that costs 100$, even if it allows recording at 96khz chances are that it will introduce a high frequency content (due to the cheap hardware) between a sample and the other, known as ultrasonic content, that on some reproduction device can make the music sound worse (even if you scale it down to 44.100hz). Therefore: on your pc sounds ok, then you play it on another hi fi, and it sounds bad, introducing weird artifacts you didn't notice before.

Other things to consider when mixing at 96khz or more:

1) the file size is CONSIDERABLY bigger, so make sure you have a lot of disk space.

As for everything, the trial and error method is fundamental to find out the right setting for our hardware, but the rule of thumb is that the cheaper the audio interface is, the worse it will handle higher sample rates, so in that case if you stick to 44.100hz it will probably sound even better, eventually.

Obviously if you have a top level interface, you will have a certain security that it will work perfectly also at the highest resolutions. 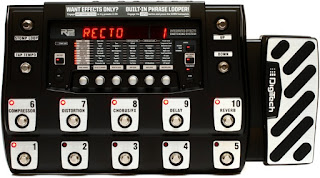 Hello everyone and welcome to this week's article!
Today we're going to review a big multi effect pedalboard, the flagship of Digitech: the Rp-1000.

This pedalboard is in the market by several years, and it is still one of the most complete solutions around: featuring a second generation sound processor by Digitech (Dna 2), it has a resolution of 24 bit and 44khz and a very extensive array of inputs and outputs making it very suitable both as an audio interface, as a virtual rig and as an integration to a classic amplifier and pedalboard.
The pedalboard lets us stream our music directly in the computer via usb, and it features a send-return system to connect to the amplifier AND a separate, bypassable, effect loop to connect other stompboxes to it placing the effects after the preamp section; finally it has stereo outputs, both 1/4 jack and Xrl, in order to use stereo effects: in terms of flexibility this unit is one of the most complete on the market.

I must admit I have a soft spot with this generation of Digitech: I have been owner of a Rp-350, which is a model with only 3 footswitches, several friends of mine own a Rp-1000 and others the basic model, the Rp-100 and Rp-155: with one of these I have also (several years ago) succesfully recorded a demotape, using it as audio interface for guitars, vocals and bass.
Digitech products have a reputation of being solid, reliable units, with a good quality to price ratio and a good preamp and effect section.

About the effects, without a doubt they are resisting the test of time: the unit is several years on the market, but it still holds without problems against the flagship products of the competitors, while for the preamp section, although it is still very good the clean and the overdrive part, you can start feeling a little of digital rasp in the highest gain part, compared with the latest digital preamps on the market (Kemper, Axe Fx and Line6 Helix), and today guitarists could start missing a bit the possibility of loading custom impulse responses. On the other hand also the high gain tone is very mix-friendly, with a very musical midrange, and the same thing cannot be said for many Line 6 amp simulators, for example.

At a retail price of 399$ (but it can be found online also for less) this is probably the most complete and versatile solution on the market today for less than 500$, it is a swiss army knife good both for studio and live environments.

- Amp/Cabinet Bypass defeats internal amplifiers and cabinets in all presets