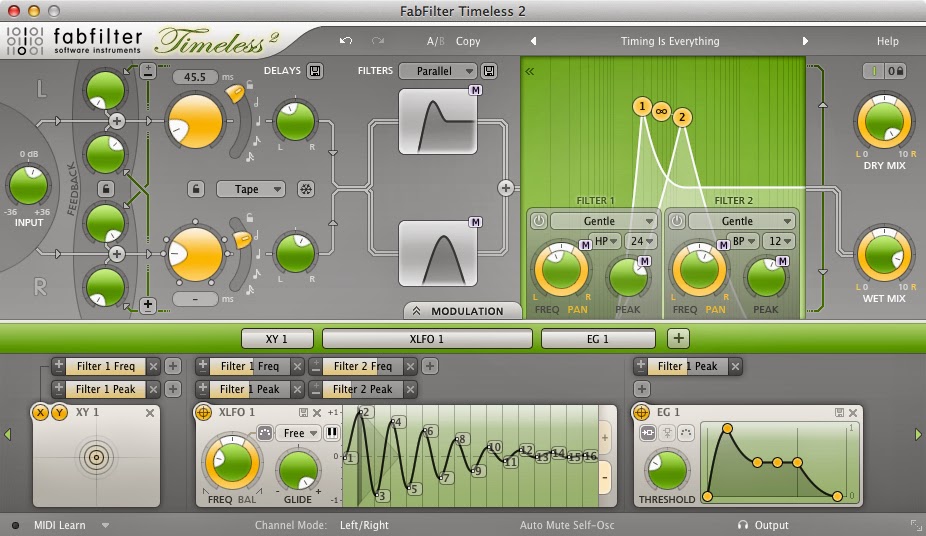 Hello and Welcome to a new article!
Today we will review a vst Delay made from Fabfilter, a producer that we have already extensively covered with our reviews in the past months.
Obviously, as for all the other Fabfilter products, the plugin is very complete, the interface has many diagrams, and there is a "simple mode" and an "expert mode" which lets us use midi automations too.
The basic interface has obviously the most common controls a delay has, such as "delay time", "feedback", "wet/dry mix", but you can also split the left and right channel and dial the settings indipendently, setting also a filter that will decide what part of the signal will be processed and what not.
The plugin also features 300 presets, divided by instrument, some of which are pretty much "mix ready".
The "expert mode" instead, lets us control the plugin with the Midi automations, and this can lead to some creative use, like step sequencing, or left-right bouncing.
Overall a nice sounding, very complete plugin!

Posted by AtoragoN at 4:47 PM No comments:

Hello and welcome to this week's article!
This article is a bit unusual: I wanted to make an overview of the 2015 most famous DAWs, explaining shortly the features and the price range, to help any of you who wants to start recording or to change workstation to choose a new one.
Let's start by saying that this will not be an in-depth review of every daw, we will only focus on the core features and the differences among them, keeping in mind that all of them are good and capable of producing the best music possible, and all of them comes with a collection of plugins bundled in order to start mixing right away without the urge to download 3rd party apps.
Let's get started!


AVID PRO TOOLS: the music production standard for many years, and still a milestone in the world of professional sound engineering, this product has started as a closed ecosystem capable of working only with its own hardware, while today it expanded its compatibility with any audio interface. Instead of buying the Daw, the producer offers today a time license which can be montly or yearly. 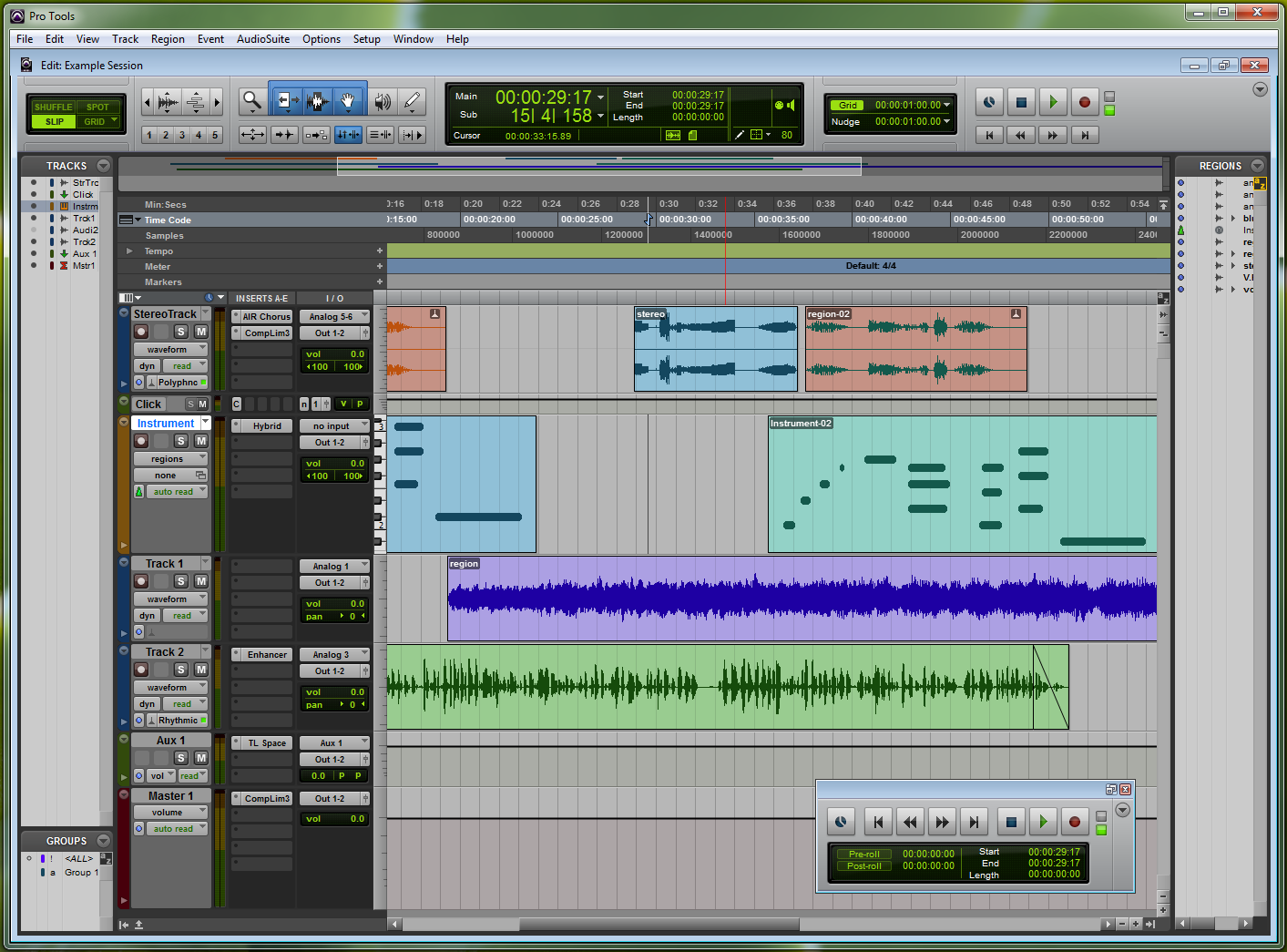 STEINBERG CUBASE: The second most common daw used in the studios, Cubase has currently reached the version 8, which promises improved speed, reduced cpu load, a new in-place audio bounce from midi and a wide library of plugins, samples and sounds (plus the new ui is really good looking).
The prices varies from 99€ to 599€, according to the number of features of the chosen version. 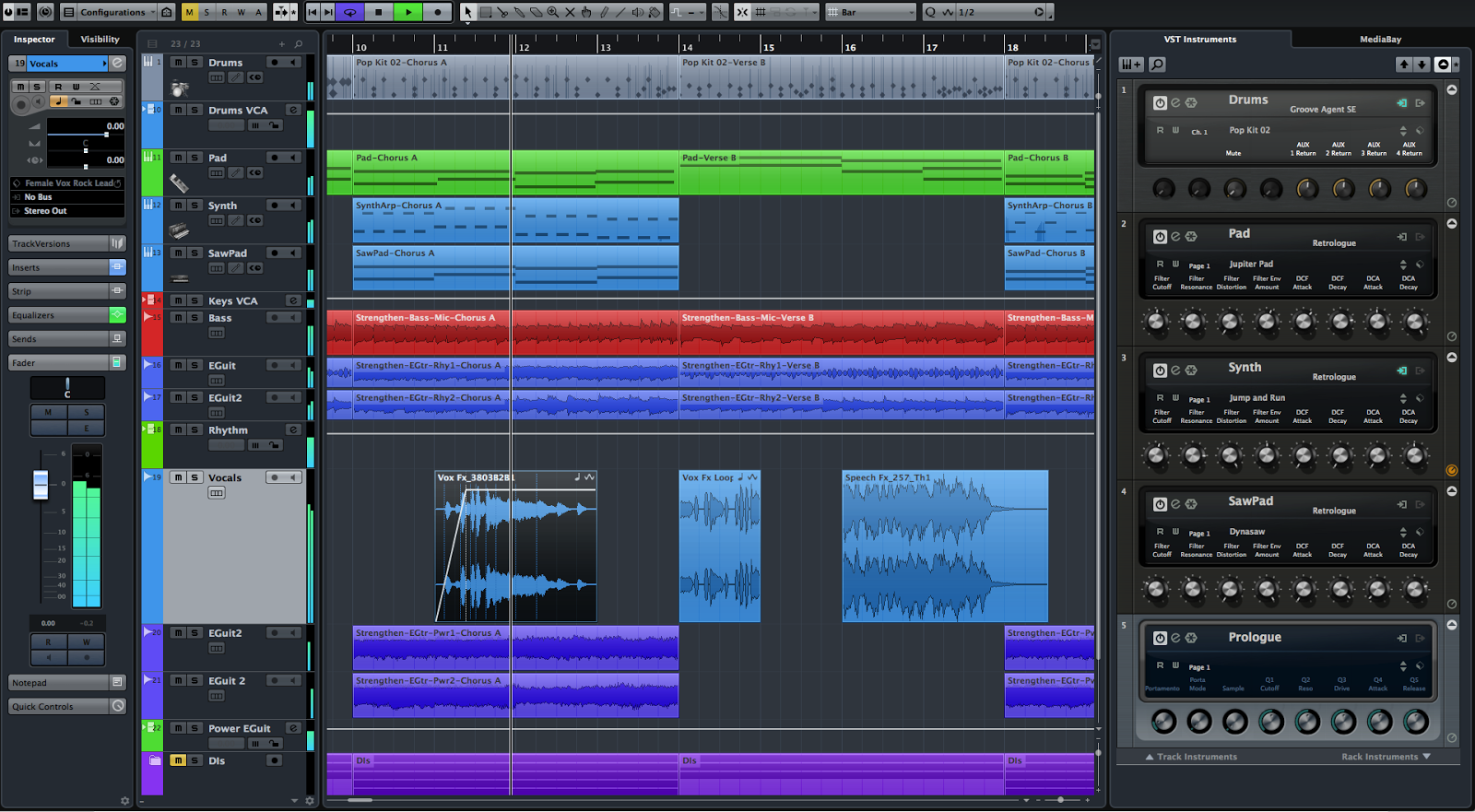 ACOUSTICA MIXCRAFT: ranging from 89,95$ to 164,95$ this Daw is obviously cheaper than the previous two and less known, but it has a good reputation due to a particularly simple and easy workflow, which makes it really suggested for songwriters. Plus the "Pro" version is packed with plugins and virtual instruments that makes it a very complete solution. 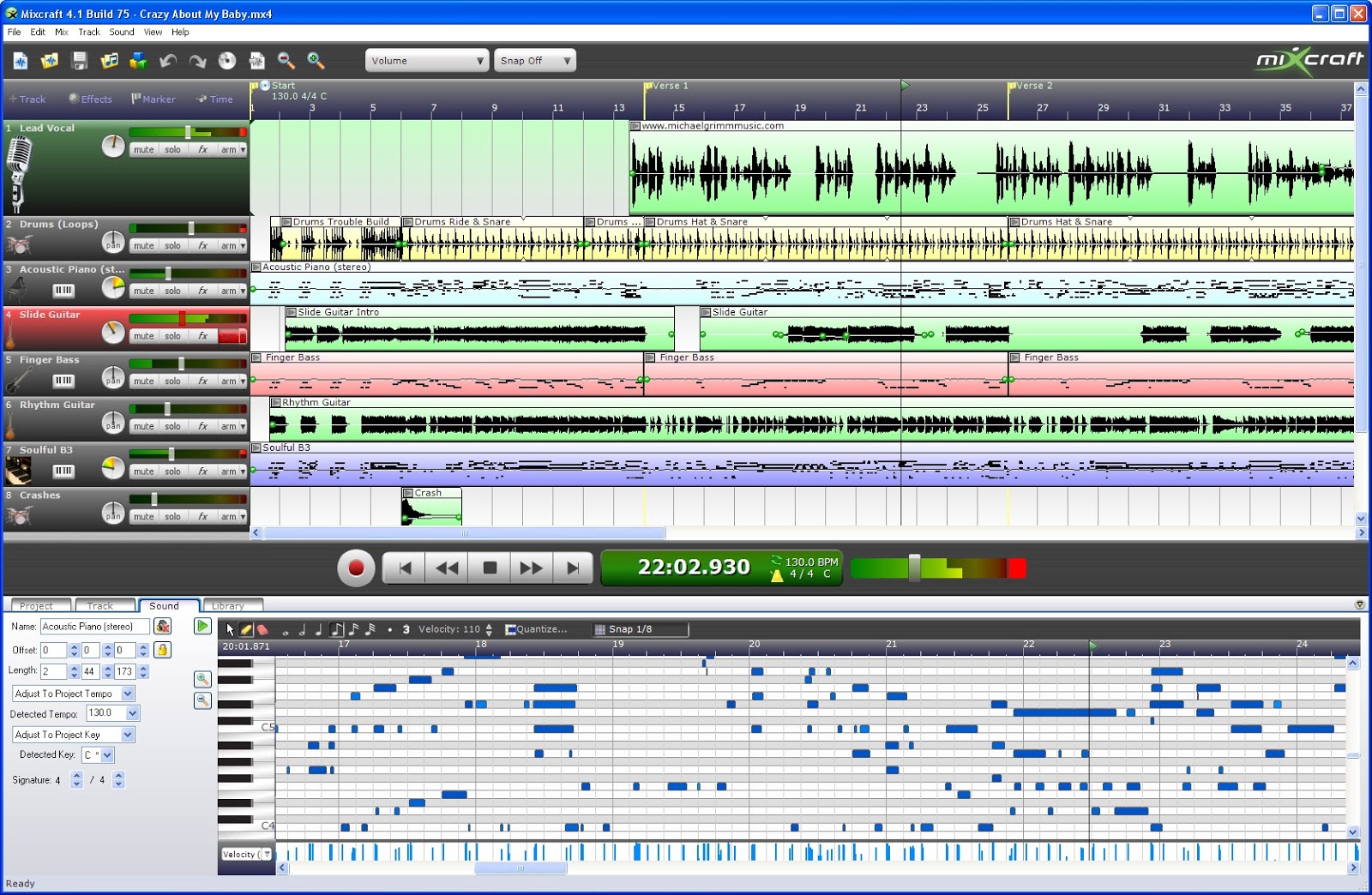 PRESONUS STUDIO ONE: ranging from 115,14€ to 460,72€ this daw is probably my favourite right now. It has a nice, smooth and clean interface, and a serie of feature that makes mixing really fast and stress free, plus it has a nice free version that makes you get acquainted to the interface before deciding to upgrade.
This daw too comes with a wide selection of plugins and virtual instruments. 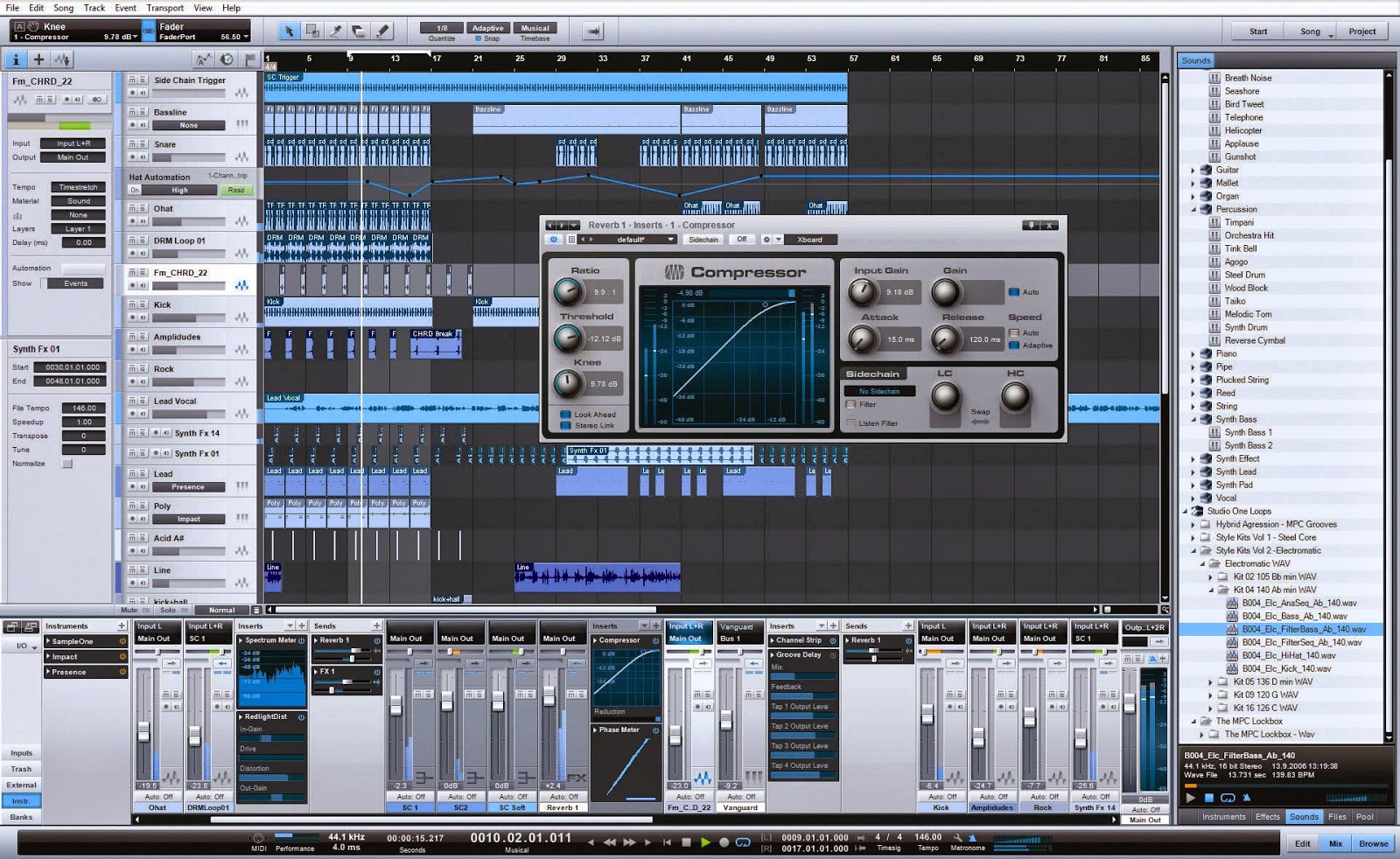 REAPER: this daw has a very strong and passionate community over the internet and it is the main choice of many small studios due to its cheap price (from 60 to 225$) and the fact that is a stable, reliable and feature packed piece of software, with a collection of plugins (called reaplugs) which can be downloaded freely and used in any daw, and these plugins most of the times will work better than the ones bundled in the other workstations.
The interface is also customizable with skins and themes, and it works in portable version too. 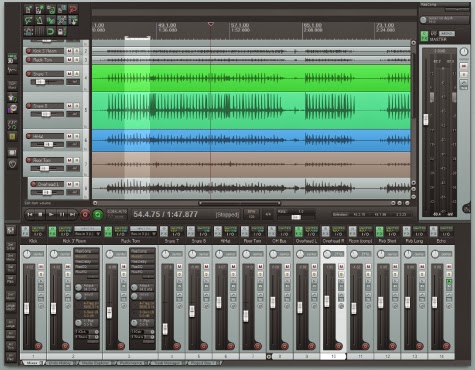 CAKEWALK SONAR: another daw with a long past (comparable only to Cubase and Pro Tools) which has kept on improving with every release, becoming one of those who sets new trends and get copied by the competitors. Sonar was the first manufacturer (maybe along with Presonus Studio One) to incorporate a mixer-style channel strip on each channel with compressors and other processors integrated like in an analog console, and its quality and flexibility has simplified the workflow of many producers around the globe. Prices span from 106 to 533€, and the license can also be bought monhtly. 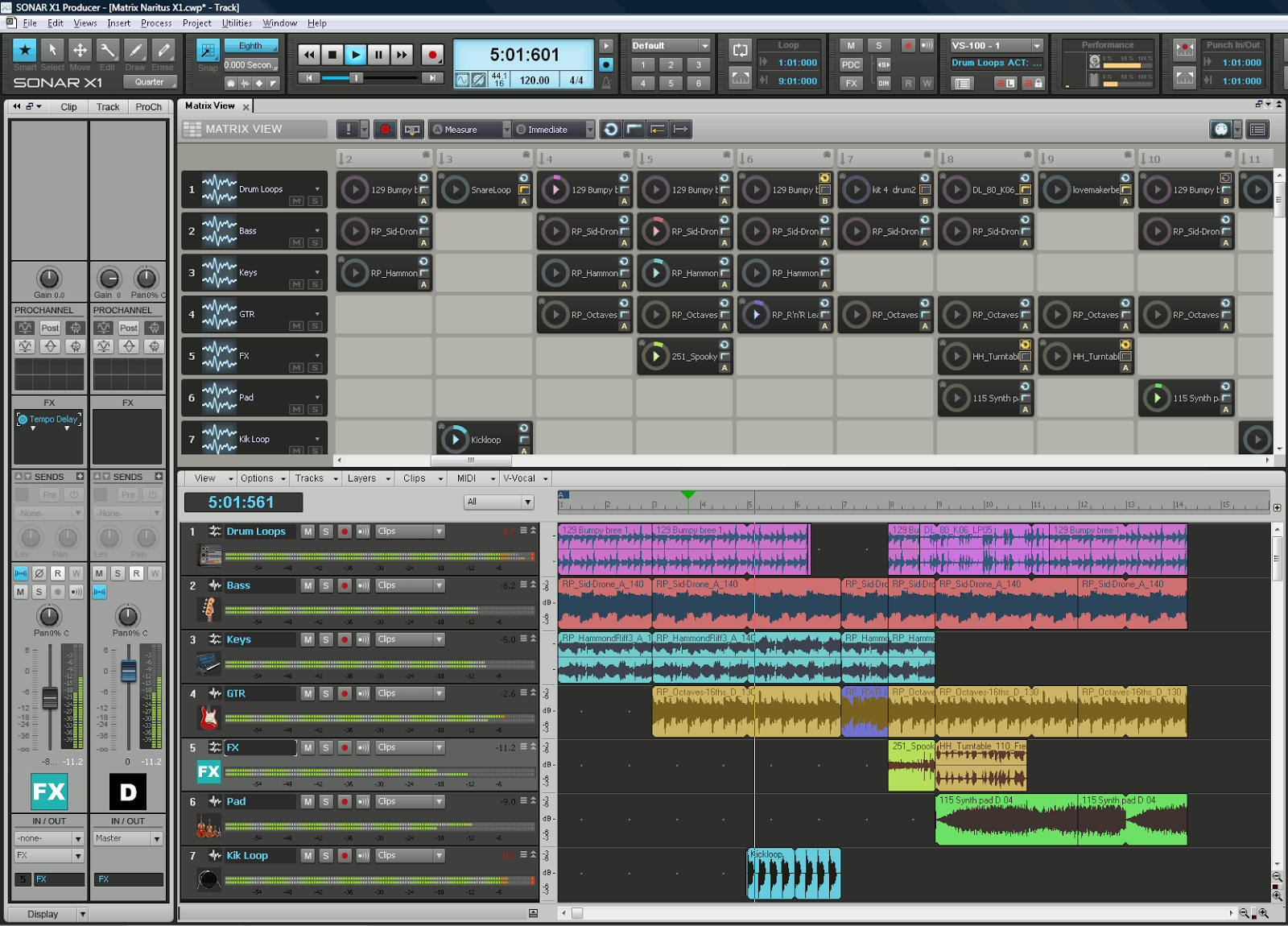 MAGIX SAMPLITUDE: Magix is another german producer which has a wide range of music solutions, which span in price from 49,99€ to 3050€ (of the "Sequoia version" of their daw).
Samplitude offers a very complete solution for the home studio, complete with mixing and mastering tools, at 99€, also with samples and virtual instruments, while the most expensive versions are obviously aimed to the most professional studios and feature tools rarely found anywhere else (for example metering tools with radio, television and cinema standards). 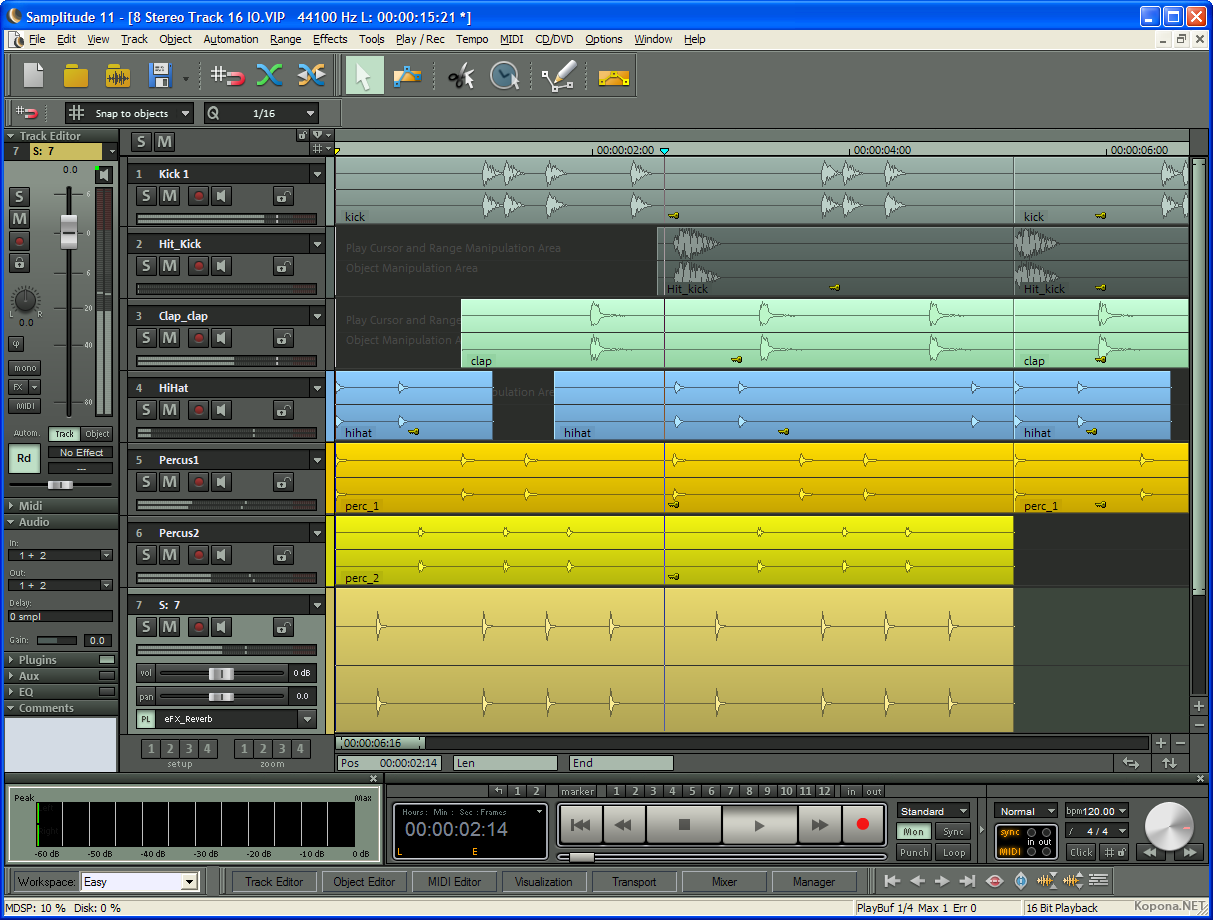 APPLE LOGIC PRO: a very complete daw, particularly popular in the U.s., that works as the "professional version" of Apple Garage Band. With only one version, full featured, at 199,99€, this software comes with a wide array of good plugins to mix "in the box" and supports a.u. plugins (audio unit), a proprietary standard, instead of Vst plugins. 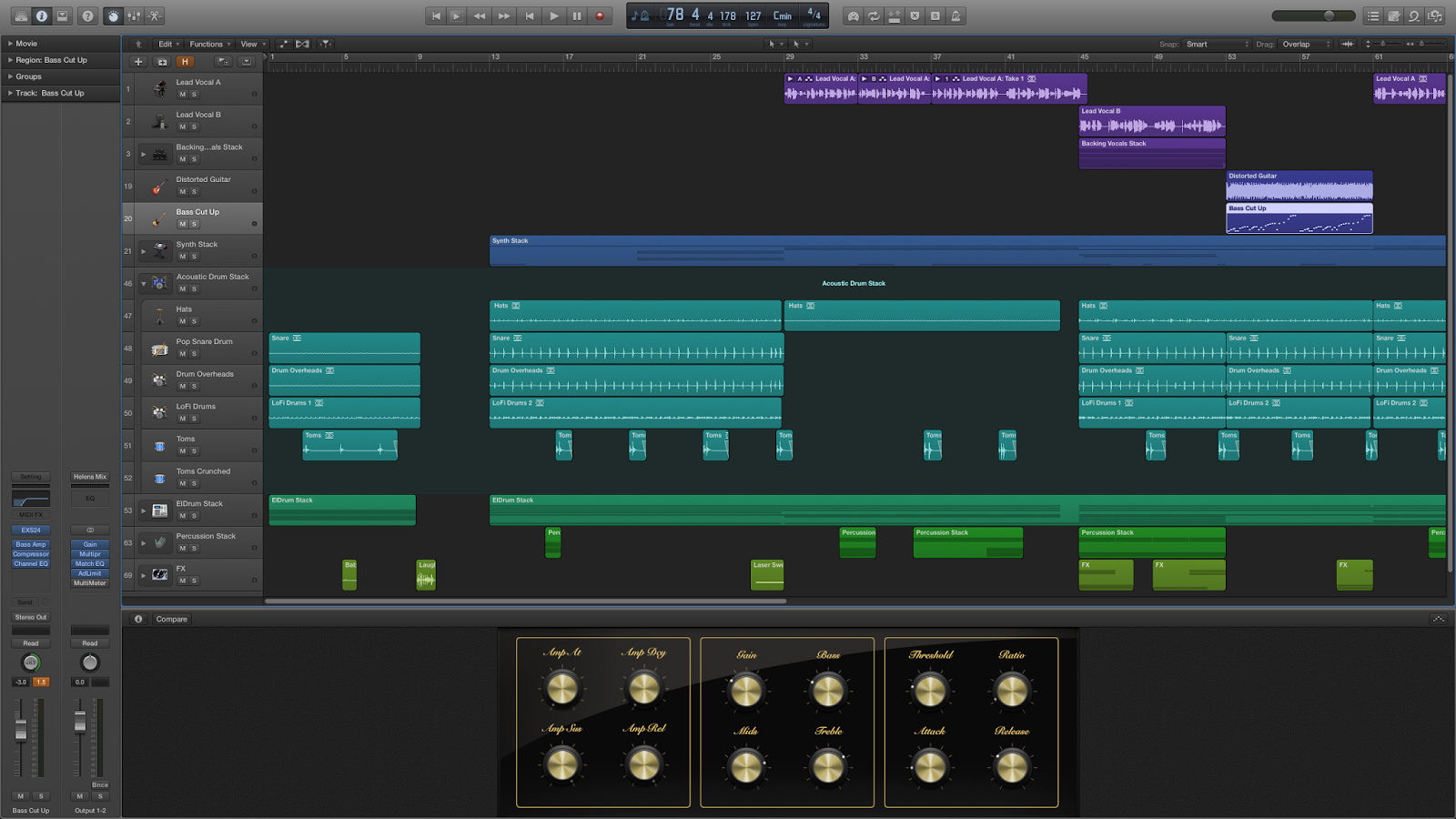 N-TRACK STUDIO: this software is probably the one with the lowest price to offer a complete digital audio workstation (49€ and 89€, but the 49 version has already all the features required for working in a home studio). The daw is cross platform (it has even an android version!), supports unlimited tracks, Vst and external hardwares, plus whoever buys the current version (the 7), has the free upgrade to the 8. The daw comes with a virtual drum instrument too. 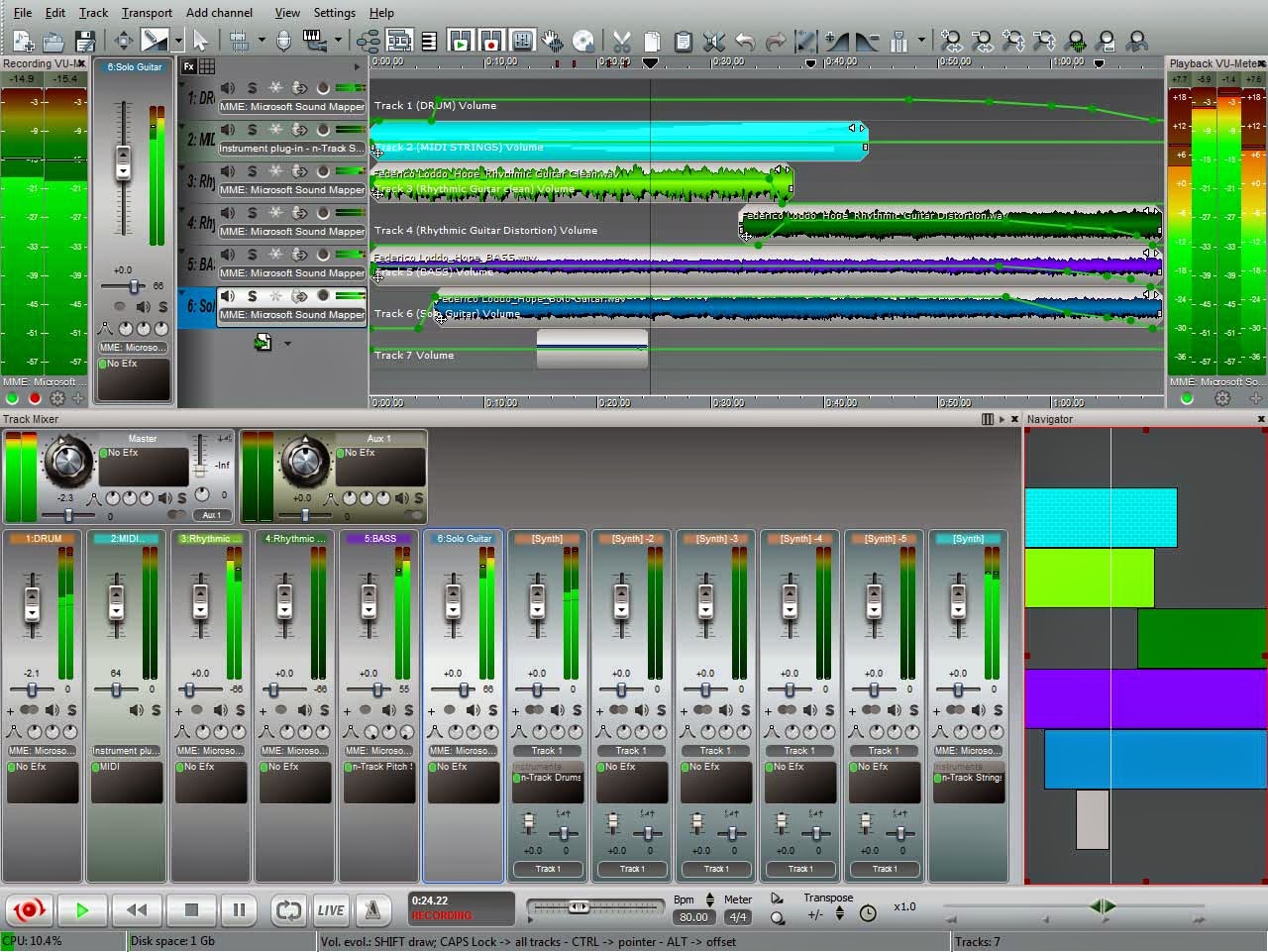 MOTU DIGITAL PERFORMER: this daw has been a protagonist of the last decade, and is today supported by MOTU, one of the finest audio interface producer in the market. With a price of 499$, this software is a really complete workstation, with appealing graphics (and support for themes) and a very refined audio engine. It supports also music notation. 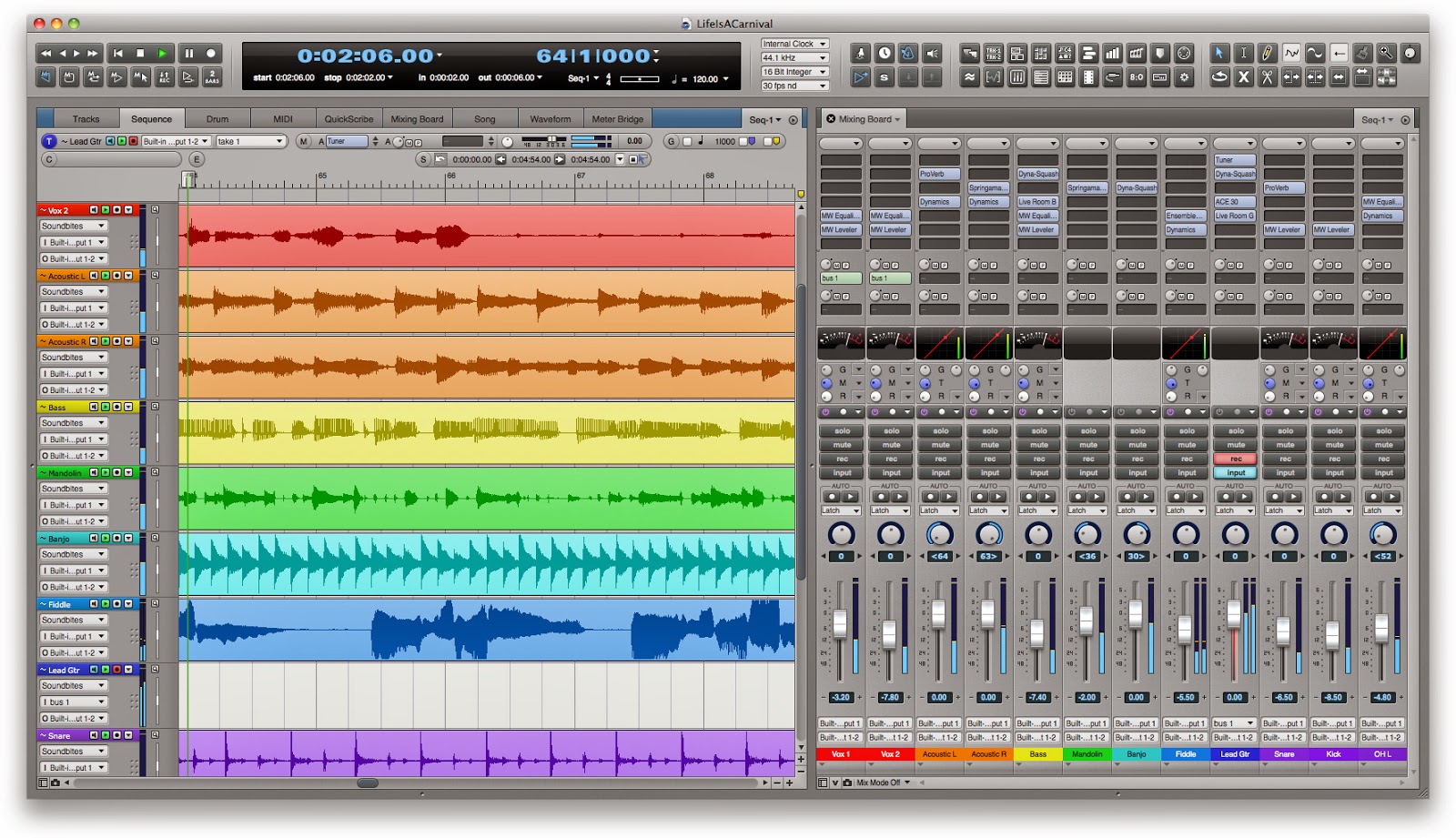 Posted by AtoragoN at 1:08 AM No comments: 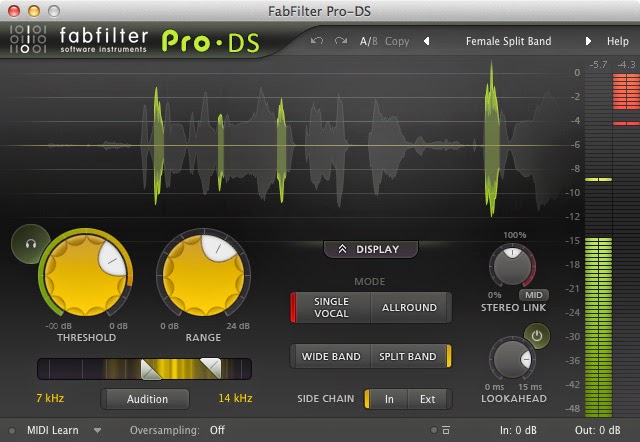 Hello and welcome to this week's article!
Today we're going to review another Fabfilter product, the PRO DS Deesser.

Do you remember what a Deesser is (click here for an in-depth article)?
A Deesser is a compressor, which is set to work on a specific range of frequences in order to attenuate the sibilant consonants (mainly the "s", the "f" and the "th"), leaving the rest unprocessed.
We could obtain the same result by using a multiband compressor, and processing only the narrow band in which these consonants lie, or we could also operate with a surgical eq, but the Deesser is the tool made specifically to solve this problem.
Obviously the controls will be similar to the ones of a Compressor: there is a threshold control and another one to find and isolate the frequency range in which the singer has the "s" consonants.
The range knob controls the amount of attenuation applied, which can also be monitored with the 2 metering tools located at the right side of the ui.
You can also choose between the single vocal processing, or the allround mode, in which the deesser will try to attenuate the sibilants from a full band, instead of just the vocal track, and to do this it will have to operate obviously with even more attention; we can choose via the mid-side knob wether to process the center of the mix or the sides, and this can help us narrowing the area for the plugin where to look for sibilants.

Obviously as for all the other Fabfilter plugins, there are A/B comparison, midi automations and support for side-chain processing.
All in all another great plugin, and another confirmation that a producer doesn't need to make 50 compressors, 50 eq, 50 limiters: you just need one good, complete processor for each type and nothing else, to work well and in a simplier way. Thumbs up! 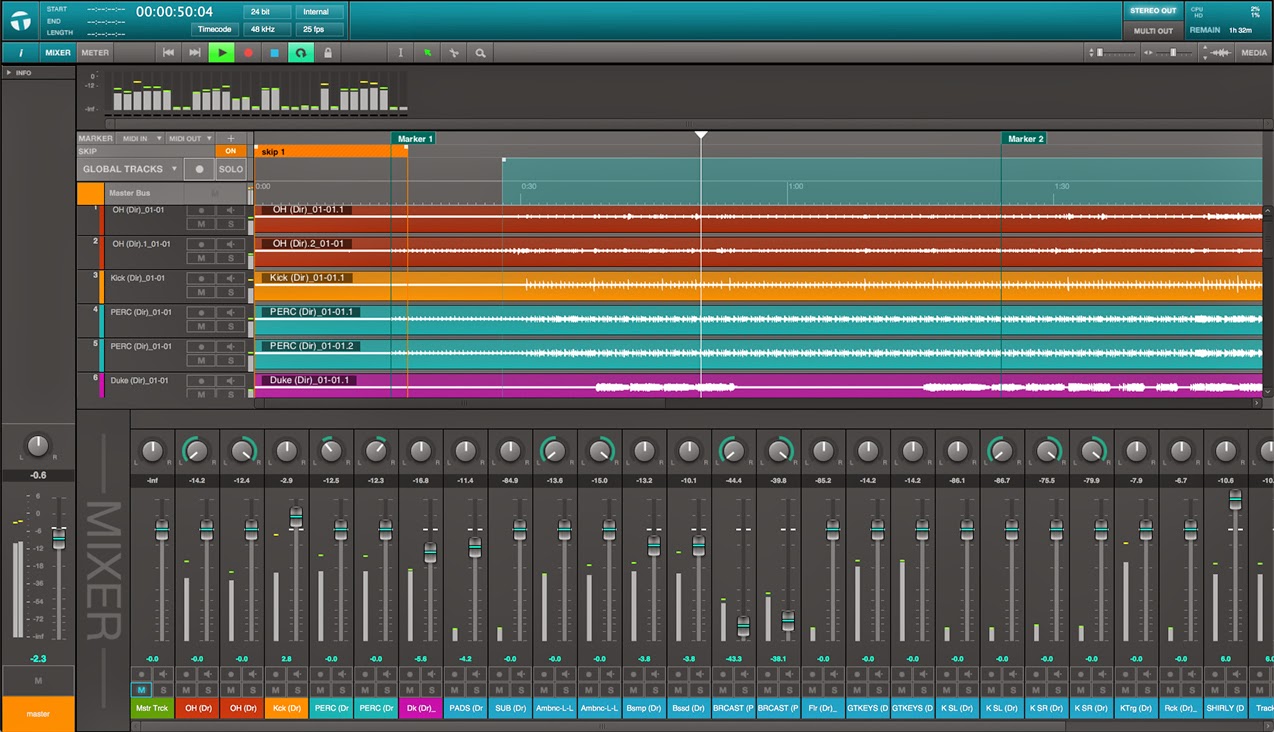 Hello and welcome to this week's article!
Today we're going to talk about two different type of tracks that we can find over the internet for many uses, for example for mixing practice.

Stem Tracks: these tracks comes from a tradition which has its roots into the technical limits of the past (it was largely used in the '60s), and they consist in tracks with a single intrument or a group of instruments (for example a drum buss) with the sounds already mixed, for example we can have a vocal track already with the mixing done, which could consist in some equalization, compression, de-essing, delay and reverb.
Why did the past music producers need this intermediate step before mixing the whole album?
Because it was impossible to do all in one step. Back in the day technology didn't allow to hear all the tracks in real time, each one of them passing into different processors as it happens today inside a DAW.
Mixing consoles had a limited number of tracks, which made necessary to create sub-mixes and to bounce them into a stereo track before proceding into mixing the whole album.
Today many bands are releasing the stems of their albums for free, mainly for learning purposes: we can hear for example only the vocal part of a certain song and analize it, to reverse engineer the mixing process and to learn more about how it's done. Some parts can also be used as base for karaoke purposes or for cover, or remix uses.

DI tracks: these tracks are usually with one single instrument, and most of the times are used for guitar and bass, straight to the audio interface.
The difference with stem tracks lies in the fact that these tracks are completely dry, it's the raw signal before any mixing.
Why do we need DI tracks? Usually for reamping purposes: we can take a clean guitar di track and apply for example a virtual amp simulator on it and hear how it sounds.
Some artist like Ola Englund have released DI tracks recorded with different pickups to let people hear how these pickups sound reamped with their own gear.
This same artist has released the DIs of a whole project, to let the people mix with his own tracks.