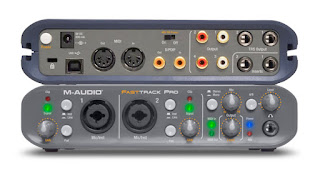 Hello and welcome to this week's article! today we're going to talk about audio inerfaces, and how to choose the one that suits your needs!
Back in the day, like 20 years ago, professional audio hardware was very expensive, at the point that it was impossible for an amateur to buy a decent equipment in order to do a good home recording, but lately, more or less in the last five/ten years, the manufacturers have started producing an increasignly wide range of interfaces of good quality, at a reasonable price, that allows anyone to try to record their own music at home, and this is the reason why the internet is full of "bedroom producers", me included :)
Why do we need an audio interface? Because we need to send somehow the signal to the Digital Audio Workstation, and the internal mic preamp of our motherboard it's just not accurate enough to reproduce it with fidelity.

Now let's analyze the main characteristics of an audio interface, in order to choose properly, starting by the kind of connection with the pc:

- PCI: nowadays only few interfaces are Pci (the internals interfaces), and they are used mainly for their AD-DA conversion, usually associated with a mixer or an external preamp. Those are often the cheapest solution and usually are also the best in terms of latency. The amount of data transmitted is very large too, the only downside is that once you have installed it on a pc, with screws and everything, it stays there, so it's unconfortable to carry it around and install it on other computers. Plus it's not compatible with laptops, and the sound quality depends on the quality of the external preamplifier you will use. (example of Pci soundcard: the M-Audio ones)

- USB: it's the most common connection and it is already featured on every computer, so nothing else is needed, just make sure that your audio interface is at least USB 2.0 (3.0 is even better, although currently I am not aware of interfaces ready to support it), otherwise it can't transport enough data to handle a medium-sized project, and for larger projects even the 2.0 version may not be enough (it carries 400mbit/s, but it's slower and less stable than a Firewire port), so it may give some latency problem.
For most of projects, though, usb 2.0 it's ok, plus Usb interfaces are fairly cheap and produced by a large amount of manufacturers, so the price spetrum it's very wide too, ranging from the cheapest ones (like Behringer), to the most high-end and expensive ones, like the E-Mu or the RME.
Beware of the sample rate, though, since the higher it is, the less tracks the interface can handle, since their dimension increases greatly at higher rates.
The price difference is because of the specs (that we will analyze in this same article) and the components quality, especially the the converters and the Mic Preamplifier quality. When the Preamplifier section is good enough, there is no need for an external preamp, therefore we can save some money.
Another important thing to keep in mind is that Usb devices are driven by the Cpu. That means that they will keep busy some cpu just to run, and this might be a problem if we have a large project and try to make some resource economy.

- FIREWIRE: this is a connection that is alternative to the Usb one, and it's not featured on every motherboard (altough a firewire Pci card can be bought for around 10 bucks), it does not support hot plugging (you must connect the device while the computer is still powered off, otherwise it may burn your motherboard), and also the average firewire interface costs a little more than an Usb one, so why does many people (me included) prefers those to the Usb ones?
Simple: a Firewire port carries more data than an Usb one (around 400 and 800 mbit/s, there are 2 different Firewire ports), it's more stable and reliable, offers a lower latency even handling big projects, and most importantly it doesn't make your Cpu work just to be active, therefore you have more resources to use on your project. There are many firewire interfaces, some of which are considered a standard among the semi-professional scene because of their price-to preamp quality ratio, such as the Focusrite and the Presonus ones.

- THUNDERBOLT: it's a new kind of port introduced by Apple, it can carry 10 to 20 gb/s, and today there are just a few (and expensive) audio interfaces that can use it, such as Apogee and Universal Audio, but probably (along with the Usb 3.0 standard) this is going to become the standard that over time will replace the Firewire connection. It carries a huge amount of data, it's reliable and today it's featured on the latest generation of Mac computers.