How to record and mix a drumset with 2 microphones (with video sample)! PART 2/2 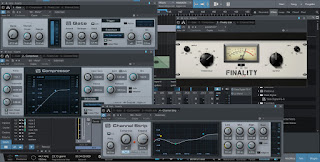 Hello everyone and welcome to this week's article!
Last week we have seen how I have recorded a drumset using only two dynamic microphones, now we will take a look on the way I have processed the signal.
This time, with the exception of Jst Finality, I have fiddled only with the Presonus Studio One 3 bundled plugins, trying to achieve a mono drum sound with enough punch and separation to be understandable in a rock mix.

Starting with the KICK track,  I have opened as you can see some preset to see how they sounded, but eventually I have modified them all in order to fit them in my mix.
The first plugin of the chain was a Gate, to try to isolate the kick from the rest of the drumset.
The second plugin is a Compressor, with a quite strong setting in order to keep the sound stable and consistent.
The third plugin is a Peak Limiter, and I am using it to fatten the kick, make it sound more "round" and even more stable.
The fourth plugin is an Eq (in this case to be precise it's a channel strip in which I have deactivated the compression section), with whom I've tried to emphasize the attack of the kick while reducing the boominess. 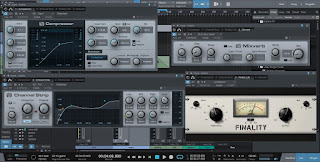 Moving to the SNARE track, which actually can be more considered the "rest of the drumset" track, I obviously have not used a gate, because I needed all the drum parts together in this track.
The first plugin is a Compressor, set strong enough to make all the drum parts (even the farthest ones) be audible without compromising the sound of the snare, which is the closest drum part to the microphone.
The second plugin is an Eq (actually also in this case a channel strip with the compressor section deactivated) with a boost in the high area to help the cymbals and the "air" of the snare to come through.
The third plugin is a Peak Limiter, to help furthermore the less audible drum parts to be heard and to add some fatness to the general sound.
The last plugin is a Reverb, just to add a pinch of space to the whole track.

As you can see the plugins are more or less the same for both tracks, it's the way I have used them that is quite different, since they needed totally different tweakings to obtain totally different results, but I think it's an interesting example of how just basic tools like Eq and Compression can help us in solving the tone problems of raw tracks and turn them into a more coherent mix.

Here you can here the result of this rehearsal (it's 2 guitar tracks, the drumset and some keyboard track), let us know in the comments section what you think about our method of recording and mixing a drumset with just 2 dynamic microphones!

How to record and mix a drumset with 2 microphones (with video sample)! PART 1/2

Hello everyone and welcome to this week's article!
In these first summer weeks, as I have written also in our Facebook Page, it is going to be a bit harder for me to post with regularity since first I went for a holiday, next I'm going to move in another country for work, so I apologize in advance if this will cause a slowing down in my posts for a while.
...Anyway, I have today accepted the challenge of helping some friend of mine to record a scratchtape with one prog-metal song they are writing, and doing it all with two directional, dynamic microphones, no virtual instrument.
We have started trying some of the most common dual miking drum recording technique that can be found online:
- the one with one mike outside the bass drum and one vertically set 1,5mt from the drumset, towards the center
- the one with one mike pointing to the kick drum beater and one above the shoulder of the drummer
- the one with just two overheads
...and so on. 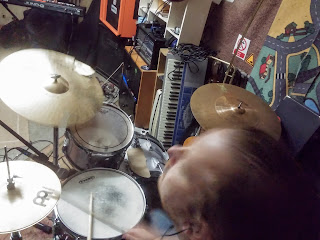 Eventually I've come to the conclusion that in our case the best thing to do was putting one mike inside the bass drum very close to the point where the beater hits and another one next to the snare drum, between the hi hat and the toms.


This way I've been able to record two decent mono tracks that were tracking evenly the whole drumset (except the floor tom that unavoidably sounded lower than the rest of the set, but still clearly audible), and the result was surprisingly good: in the next part of the tutorial I will also post the mp3 and explain the way I've mixed it.

By the way we have used the same microphone (a Shure Sm58) also to record the amp, a Mesa Boogie Studio 22+ combo using the single microphone technique, and we will use it for vocals too. 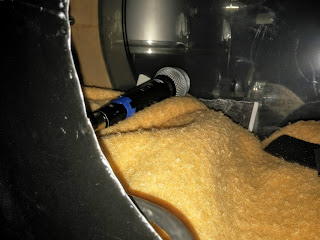 HOW TO TURN AUDIO DRUMS INTO MIDI! (a guide for dummies)

Hello and welcome to this week's article!
In this article we are going to discover an interesting way to use our drum replacers, such as ApTrigga or Drumagog (click here to discover what they are).

Let's imagine one of these 3 scenarios (but there may be many others):

1) we have a set of not so good drum microphones and no trigger but we would like to record the performance of our drummer and give it a good sound.

2)  we want to record our drummer in acoustic but at the same time we want the editing flexibility of a MIDI track.

3) we want to keep our acoustic drum tracks, but at the same time we want to add drum samples to fatten the sound.
In all these three situations we need first to load a drum replacer on each track we want to turn into a MIDI (for example one for the snare and one for the kick track), and then set it (usually with the threshold control) in a way that lets it detect only the transient of the drum part we need (and ignores the bleed of the other drum parts).
With the Velocity control (or equivalent), instead, we will set the dynamic range that our drum replacing software will translate from the audio track to the MIDI one.
Last, we must tell our drum replacer also to which note of the piano roll send the impulse, in order to avoid sending a snare inpulse in the kick key (which is usually C1) or vice versa.

Now we can create a MIDI track for each drum part we need (for example one for the snare and one for the kick) and choose as input source for the MIDI track the drum replacer of the desired drum part (es. Drumagog).

Now if we arm the MIDI track and press Record, it should play the whole song and record in the MIDI track (or tracks) all the impulses taken from the drum replacer software, so that at the end of the song we'll have a MIDI track with all the kick hits and another one with all the snare hits (obviously kick and snare are just an example, we could choose to trigger only the toms and it would be identical).

Now we can reunite all those MIDI tracks in one single MIDI, so that we'll need just one drum sampler to play the whole set, thus saving resources; in order to obtain this we can drag and drop the various MIDI tracks into one, being careful of having them starting all at the same point.
Once we have our "MIDI drum track" reconstructed with all the parts (in some Daw we're gonna need to use the Paste tool to merge the tracks) we need we can load our favourite Drum sampler and choose a sound we like.

The last operation is (if we feel we need it) to Edit our MIDI drum track to perfection, correcting timing errors, the strenght of the hits and so on.

Hope this was helpful!

Posted by AtoragoN at 4:40 PM No comments: