Differences between Class A, B, AB, D power amps 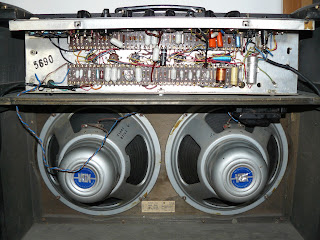 Hello and welcome to this week's article,
today we're going to talk about power amps!
This article is to be intended as a follow up to our Tube vs Solid State power amps article.

Let's start off by saying I'm no engineer, I have made some research (I will put at the end of the article my sources), and the aim of the article is just to put in simple terms the differences, acting as a reference article for the simple musician that is not too expert in electronics.

We all have read in the description of a guitar amplifier (or any power amp in general) the definition "Class A", "Class B", "Class A/B", "Class D" and so on, wondering what it means: it is a code to describe the way the power amp works (yes, there are also other classes, but these are the most relevants in sound amplification).
First let's define what is a preamp and what is a power amp: a preamp is the device that boosts microphone and instrument level signals to line level, a power amp is the one that boosts the line level signal strong enough to drive a speaker.

Class A power amps: these were the first tube power amps ever created, the least efficient in terms of power comsumption to output ratio and the simpliest to build; basically the electricity passes thorugh one or more tubes in serie, which operates continuously. It generates a lot of heat and consumes the tubes much faster than the other circuit types, but it has also some particular property, for example it has no crossover nor switchoff distortion, which are typical of Class B power amps. A famous The tonal characteristics of this kind of power amp are a "bluesy" and particularly "musical" tone.

Class B power amps: in these amps there are two or more power tubes, and this configuration conducts the power half of the time in one tube and half of the time in the other (at a very high speed), prolonging the life of the power tubes but generating a very particular distortion, which is typical of many guitar amplifiers cranked to the max. This distortion is called "crossover distortion" because it is generated by the current that, moving from one tube to another alternatively (or from one transistor to another in solid state amps), for a split second in time it is not drawn by neither of the two, thus generating that noise.
As a general rule, Class B power amps grants more headroom, higher volume, better clarity and sparkle than the Class A ones.

Class AB power amps: these kind of amplifiers are very similar to the Class B ones, but the tubes doesn't stop drawing the current before the other one is on, so there is never a moment in time in which for an instant both of them are off. This reduces the amount of crossover noise, and allows to save at the same time some tube life and power comsumption. This system is often used in high-end home sound systems.

Class D power amps: these ones operates with transistors instead of tubes, and this means that they operate on a better power efficiency (less heat is generated, less electricity is wasted) and they work through a system called "pulse width modulation", which means that the sound is divided in many single pulses (measured in hertz), and the "width" of these pulses generates louder or quieter sounds. The "space" between a pulse and another is noise, which needs to be eliminated from the system with a filter, and all this project requires a significantly more complex amount of engineering compared to the tube circuits aforementioned. Class D power amps  usually are less expensive than their tube counterparts, but they lack some of the tonal characteristics many guitar players are after (although technology is slowly catching up, and it is very likely that in the near future this differences will be completely nullified), on the other hand they are much more reliable, solid and power efficient. 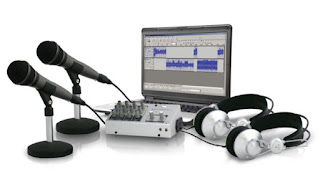 Hello and welcome to this week's article!
This time we are going to talk about how to create a radio podcast.

What is a podcast? Think of it as a radio show that instead of listening in real time you download it (or stream it) via Mp3, therefore you can create an archive of episodes that can be listened at any time.

What do you need? Pretty much the same material you need for a home studio:

And here's the 8 steps to create a podcast:

1) First off, you load your favourite daw, set up the audio card and the microphone.

2) Now create at least two audio tracks: a mono one which will be your voice and one or more stereo ones (depending on how many background music-songs-jingles you want to reproduce at the same time), and be careful in setting the gain levels.

3) Record your voice parts, for as long as you want in the mono track.

4) Insert in the stereo track(s) some background music, or for example a song or a jingle you want the listeners to hear.

5) Set up a de-esser and a compressor in the mono track to make your voice to come out loud, warm and without excessive dynamic excursion.

6) Set a compressor in Sidechain mode in the stereo track(s), using as trigger the mono track. This way, if you can set it correctly, when you will speak, the music in the stereo track will automatically lower its volume (this effect is called ducking) leaving your voice to come through clearly.

7) When you are satisfied of the content produced you can add a little touch of mastering in the master chain, adding a limiter and a metering tool to make sure it is not overcompressed.

8) The last step is setting the markers at the beginning and the ending of the podcast and exporting the Mp3, possibly in a decent quality like from 192khz up, and share it with the world, keeping in mind that some platform such as Youtube recognize copyrighted material and sometimes blocks it, so be careful.

Hello and welcome to this week's article!
Today we are checking out the Orange Jim Root Signature Terror!
Jim Root is the guitarist of Slipknot and former Stone Sour, and he has a long tradition in using Orange amps, especially his classic Orange Rockverb 100 MKII.
What Orange did was taking the Dirty channel of the Rockverb and turn it into a small switchable 7-15w high gain tube amp, single channel.
This head is extremely tiny and light (actually it's a half stack), also considering it's a tube amp, but the impressive thing is the volume it can put out, both in 7 and 15 watt mode: way more than enough to rehearse with a drummer.

In terms of tone we have a high gain version of the classic Orange sound: a british sounding, deep growling tone, with the typical low mid chunkiness that can be found in all the amps of the brand: an eq timbre basically opposite to the Marshall one, which is a bit more high-mids oriented.
The ideal genres for this kind of sound are Stoner Rock, Doom, modern hard rock, and if we lower the gain we obtain also a pleasant, warm clean-overdriven tone, without excessive background noise.

As for all low wattage amps the upsides in terms of size and weight have their counterpart in low headroom, less air pushed by the basses and overall a slighly thinner tone than a high wattage amp, but compared to most of the other low watt amps I have tried so far (for example Engl and Mesa Boogie) I have to say that this is probably the loudest one, and the one that gets the closest to a regular 100w head (the only other one with similar characteristics that I have tried so far capable of holding up against this is the Marshall DSL15H Head, which has even more functions).

Overall definitely an amp to check out if you are a musician who likes to travel light but also to have a mean tone! 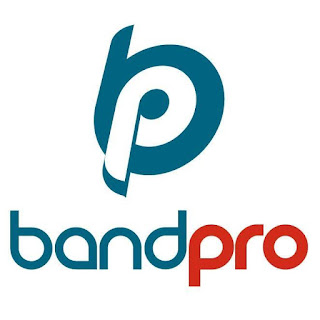 Here is an article from a personal friend of mine, Edoardo Del Principe, which has started a serie of lessons about how to promote your own band, you can find the link in the end of the page.


I’ve been on each side of the barricade. I’ve been a reviewer, a promoter, a musician and I booked some gigs here and there with other people in the last years, so, I know how these worlds work together and how much bands are struggling to reach a good visibility in the underground. The music business is really evolving fast in this decade and the old pillars are going to be destroyed very soon. The full length album is now part of a large and complex chain of distribution. Is the final piece of a long road but it’s not necessary the only part. Today the market says that small releases are better than a large one but no one is saying that to young new bands. Today the market wants more way to listen your music and probably doesn’t care about any physic copy of your piece of art. Today the market is focused on singles and jingles and doesn’t care anymore about eleven tracks on one artists but eleven tracks of eleven artists, just because there are so many good artists out there that the market can’t stay focused on just one single act.

The Market is people and if you don’t know people, you don’t know your target, if you are not part of the market your music will be forever out of any context. No one is saying to bands to stop forever doing full album alone. No one is saying to young bands to stop paying facebook for self-promotion. No one is saying to young bands that the 80’s are gone and the world changed so much and so deeply that everything in music has different meanings or values of ten or five years ago.
You can’t emulate the big sharks when you are the smallest fish on the ocean, you’ll be eaten so fast that your death will be painful but definitive. 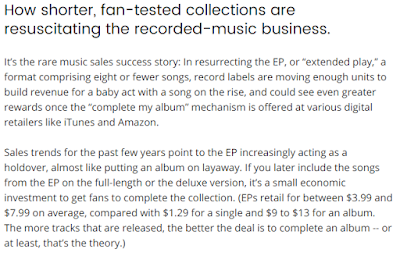 
This is why I started Band-Pro. Band-Pro is an environment for bands to grow and learn about music business, how to promote yourself, how to relate with labels and clubs. Band-Pro is all my experience and all my knowledge for band who are struggling to reach an audience that already exists but seems so ethereal. My service is very pragmatic I don’t offer you any sort of number of sales of views, this is a path that We can walk together and the final point depends all by Us.