Normalizer vs Maximizer vs Limiter: what's the difference? (With free Vst Plugin) 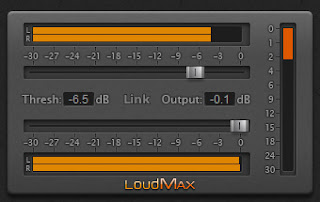 Today we are going to expand our knowledge about Limiters by clarifying a fundamental difference: the difference between a limiter and a maximizer.
Sometimes in mastering suites or in the plugin bundles that comes with a Daw these two concepts are exchangable, like they mean the same thing, but it's not exaclty like that, and today we are going to see why.

We have already covered what a Limiter is: it is a tool that takes a track at mixing volume (usually around -12db) and that sets a ceiling that cannot be surpassed, then with the gain control we can gradually rise the volume until it sounds on par with the commercial tracks (this is if we are using the limiter for Mastering, but we can use it also to tame certain single tracks in a mix).

A Maximizer instead is not only a limiter but it includes also one: it is a tool used to get the most volume out of our recording by applying 2 different processes to our track: a Limiter and a Normalizer.

A Normalizer is a processor that takes the loudest peak of our signal and boosts the whole track until this peak reaches the set ceiling, but the maximizer first applies a Limiter that levels down the loudest parts (according to the a selected threshold) and THEN applies a Normalizer, thus first reducing the dynamic range of the track and then rising the overall volume.
The reduced headroom creates more space in which we can pump up our track.

While a Limiter as we have said can be used also on single tracks during the mixing phase, a maximizer is used almost exclusively during mastering, therefore it often features dithering and other tools made to finalize the track: unless you are using it for mastering, you might want to turn these extra features off.

Which one to use? It depends on the type of music: if the music is very uncompressed and presents a lot of headroom, a maximizer can help in reducing the excessive dynamic range, but if the song is already quite compressed (e.g. edm) the dynamic range can be already little, and a maximizer can end up in creating distortion artifacts and messing with the low end, by producing a "pump" effect that is rarely desired.

My final suggestion is to use a Limiter as a general rule, and to switch to a Maximizer only if the mix sounds still weak and too many loud peaks that eats up too much headroom, but be always very careful in leaving enough dynamic range in your song, or it will become ear fatiguing and less enjoyable.

Today there are many maximizers available for download, both  free and paid, but a free example of limiter is the LoudMax by Thomas Mundt, that can be downloaded HERE.
Let me know what do you think about it!


Now that we have a very basic explaination of the main values to check out we can see the chart with the suggested levels for the various environments: we should use good metering tools during mastering and keep in mind the main reproduction platform our mix will be played from if we want to optimize the quality:


Obviously these values can be modified according to the genre, just keep them in mind as maximum limits not to cross, then if you have for example a jazz song with 16db of dynamic range it's absolutely fine!

I hope this cheat sheet is useful (and I would like to thank also the Mastering the Mix website for the source of informations), let me know what do you think in the comments!

Email ThisBlogThis!Share to TwitterShare to FacebookShare to Pinterest
Labels: MASTERING 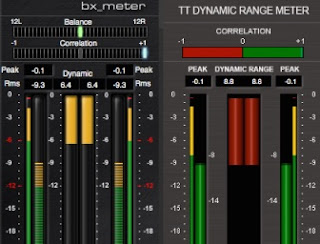 Today we are going to expand our mastering articles about metering and the loudness war with some average guideline about the correct levels to use, in order to make our songs play at their best in the various environments.

Why do we need a specific type of mastering for a specific purpose? Why can't we use the classic cd mastering for all platforms?
Of course we can, the problem is that several platforms perform some processing to the track on their own, usually compression, or limiting/maximizing, to reduce the differences in level between the songs, and we need to anticipate those moves in order to avoid a mix that distorts, or that sounds too squashed.

Before getting into the numbers we need to get acquainted with 3 acronyms:

Loudness Units Full Scale (LUFS): it's the scale used to describe the perceived loudness of audio material. Until some year ago, due to the loudness war that was raging in radio and tv, mastering engineers were encouraged to push the perceived loudness as far as possible, while today streaming services lowers the volume of the louder tracks to make them all fit in a same standard, and this encourages the mastering engineers to do the exact opposite: the idea is to privilege sound quality over a song that's constantly on the verge of distortion.

Decibel True Peak dBTP: when we record a sound with our audio interface, the analog curve (which is rounded) becames a serie of ones and zeroes, basically a ladder, and when we export the mix to reproduce it, the reproduction device (for example a stereo) needs to turn it back into a curve; doing so it rounds also the loudest parts (which sometimes can become flat in the digital realm), and this can result in a slight increase in volume.
This is the reason why we shouldn't master our tracks with output 0db, because with the conversion process, it can turn easily into distortion.
How do we solve? We need to master at a slightly lower peak (for example -0.5db) in order to avoid this "inter sample distortion".

Dynamic Range (DR): this third and last criteria is extremely important: it's the distance between the quietest (the "short term LUFS") and the loudest parts (the peaks) of our mix. If it's too reduced it means the song is overcompressed or overlimited, and this means that probably the transients, which are the punchiness of the song, are getting lost.
Nailing the right dynamic range is essential for a good mastering, and as a general rule we should never have a dynamic range lower than 8db: the lower the number, the minor the range.

Email ThisBlogThis!Share to TwitterShare to FacebookShare to Pinterest
Labels: MASTERING

Today we are reviewing a new drum sampler from Audio Assault: Druminator!

Druminator is a Vst drum sampler that features a drumkit with 2 snares and 2 kicks (with the possibility of retriggering), several routing and mapping options and a surprisingly complete array of in-built effects: Compressor, Clipper, Saturation, Transient shaping and Reverb, plus a quite complete mixer with independent channels (in which also the mic bleed is controllable).
The first thing that I have noticed is that this plugin shares the same clean and rational user interface style of other products of the brand (like the Grindmachine II); I appreciate it a lot because it tries to minimize the number of menus and to show everything in the most tidy and intuitive way possible.

Then I have started to fiddle around with the kit: unlike many other drum samplers that have only processed samples, Druminator samples are unprocessed, and the presets (like the Metalcore one I have used for the video) just use the bundled effects to get to the final result: this gives us an impressive flexibility, and basically lets us take care of the drum track without the need of any external plugin (another thing that I love).

The sounds are good, very usable (in the video sample I have made I have just loaded a preset and left the sound completely untouched), balanced and clean, and it can be used with a wide range of genres, from rock to the most extreme metal.
Consideting the price, which is very affordable, this drum sampler is a great bang for the buck, probably the most feature packed drum vst in the price range, and I definitely suggest you to check it out (there is also a trial version).


- Unprocessed Drumkit with 2 snares and 2 kicks

- 2 band parametric equalizers with shelves and filters for all channels

- Trigger channels for snare and kick, blend your own samples!

- Multi-Output for mixing outside the plug-in.

free karaoke software and how to use it 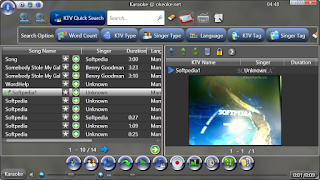 Today we are talking about a topic that is not strictly tied to home recording, but that is another way to enjoy music together, so since I've been requested an article about it, I thought it's worth mentioning, once in a while.

Karaoke is a great way to have a fun evening with friends that doesn't play music, and the internet offers plenty of software, both free and paid, to load your lyrics and synchronize them with a music video or a static image.
There are several standards in which lyrics can be loaded (from huge archives that can be found online) in any software, and the most common is .KAR.

The plugin we are showing in the picture as example (but more or less they all work in the same way) is OkeOke.net, an open source karaoke program available also in portable version, that offers the essential features to enjoy an embarassing karaoke night.

What you need is the mp3 or the video of the song and a karaoke file supported by your karaoke software, and with the software you can run the song and it will sync it with the karaoke file showing the lyrics at the right moment.
Some file formats features also directly the Midi file alongside with the lyrics, so that no additional file is needed.

Another alternative is to go to one of those free Youtube to avi websites and download directly a karaoke video from Youtube, and to create a library of videos with the lyrics hard coded.


Here are some free karaoke players, but there are many others available online (a bit harder is to find the free version of the karaoke files, but there is some library around):

- Walaoke: a free karaoke player that also offers an android app to control it.

- Karafun: a karaoke player that supports also video and that offers an internal search engine.

- Okeoke.net: the aforementioned, free karaoke player, which is made by a media player and a part in which you can load .KTV files and let the two parts run together to sing synchronized with the lyrics (the portable version won't work on some computer).