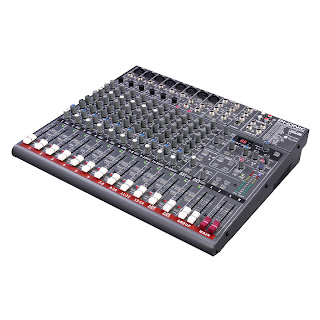 
- Something about Microphone Preamplifiers: As we have already seen, the quality of the microphone preamp components and the quality of the ADC - DAC converters is where most of the price of an audio interface lies. The more an interface is expensive, the better probably those crucial sections are, in terms of construction and electrical components quality.
Which are the characteristics of a Mic Preamp, beside its intrinsic quality? The presence of a 48V Phantom Power switch, that is used to transmit electricity through the cable to a Condenser Microphone, a kind of microphone that features an active electronic circuitry and cannot work without this function; beware not to turn the Phantom Power on when plugging a dynamic microphone, otherwise you may damage it!
Another interesting feature often found on Mic Preamplifiers is the 20db Pad, a function that drops the input signal 20db lower, and this function is useful when plugging to the interface some instrument that has a signal too high, so high that it cannot be compensated just by turning down the input knob.
Beware when recording of avoid clipping at any cost! If the "clip" led (or meter, according to the type of interface) turns red, the input level is too high, this means that some part of the signal gets lost and it's interpreted by the DAW as plain noise. In this case, is very suggested to record again the part at lower settings, because it's practically impossible to restore.

- Something about the Dsp Processors: The most high end interfaces on the market sometimes features an additional processor, created to provide effects (such as Compression and Reverb, for example) without consuming the computer's CPU.
This is particularly useful when recording Vocals, since singers often need some real time processing on their headphones, at the lowest latency rate possible, in order to hear themselves "in the mix" while performing.
We can find a Dsp on the top-range Interfaces of many manufacturers: Motu, M-Audio, Focusrite, among the others.
Another use for Dsp processors is not only to monitor the sound with the effects on, but also to record the sound itself with the effects applied, and under this point of view there's plenty of interfaces, especially for Guitar and Bass, such as the Line 6 Pod (click here for a dedicated article) and many other devices, that will apply to your sound an emulation of Amplifiers, Cabinets, Effects and so on, all without burdening on the computer's resources: let's not forget that some of these effect devices can be used as an Usb Audio Interface too!

- The Right Interface for The Right Job: When choosing an audio interface it's important to have clear in mind the main use we intend to do with it.
Recording: If we need to use our audio interface mainly for recording, we need to choose the one with the right amount of inputs for our instrument, for example if we need to record drums, we will need an interface with many mic preamps (possibly at least eight inputs, for kick, snare, hihat, 3 toms, and 2 overhead). Another interesting choice is a mixer that sends all the channels into separate channels of our DAW.

Then we need a good quality ADC (analog to digital converter) with a high dynamic range, at least 96 dB. A high dynamic range for the DAC (digital to analog converter) isn’t needed, because the audio interface is only used for recording.
Mixing and Mastering: For these tasks we will need instead a good quality DAC (digital to analog converter), at least 110dB of dynamic range: this is necessary since we want the result of our mixing to have the same headroom it had when we recorded it, plus a good mixing quality will help us in the Mastering Phase too.
Another thing we may need for mixing is the correct number of inputs and outputs, as we've already seen in the second part of this tutorial: if we have some hardware processor such as an equalizer or a compressor, we will need at least two inputs and outputs, and maybe some S/pdif connection will help too.
If we use it just for mixing or mastering, our audio interface for mixing won’t need a high dynamic range of ADC (analog to digital converter).
Finally, if you want to go more in depth with all the technical features of an audio interface check out this additional article about the audio interface specs to nerd out even more!

- Happy First Birthday Guitar Nerding Blog!!: With the conclusion of this three weeks long article we're celebrating the First Atoragon's Guitar Nerding Blog's Birthday!! Thank you to all the viewers, keep on supporting us, becoming fan on Facebook and sharing our links, commenting articles and videos and collaborating with your articles! We need your help us to becoming the no.1 resource site on Home Recording Tutorials around!

Btw: ATTENTION, Facebook Fans! Facebook now requires page owners to pay to promote updates if we want our content to be seen by more of our fans. If we don't pay to promote our posts, only about 10% of our fans receive updates on their Facebook homepage feed.
To keep RECEIVING ALL POSTS FROM US you have to open our page, hover the mouse on the "Like" button near the gear symbol. In the pop-up select "ADD TO THE INTEREST LISTS". Then create an interest list (Make a Name for your sites). Then when you select that interest list you will see ALL of our posts.
Rock On!