Hello and welcome to this article!
Today we're going to review a new guitar amp simulator from Audio Assault: the RVXX!

The RVXX is an amp simulator based on "an extremely aggressive high gain lunchbox amp with a very big bite"; even if it's not expressely said, I imagine that we are talking about the Revv G20, a 20w all tube little amp, which has a lot of gain and it is indeed extremely aggressive.

Right after you load the plugin you will find yourself in front of the typical Audio Assault interface, which is basically the same seen in the Sigma amp sim: a nice 3d render of the head, a simple one-knob noisegate, a one-switch booster, an IR loader with 12 custom SeaCow cab impulses, and the amp controls.

This head has two channels (clean and distorted) with common eq section, presence, depth, master (which adds also saturation) and two extra switch: aggression and wide, as in the original REVV head.
The wide switch adds bottom end (and some high end in the clean channel), while the aggression one adds some gain and changes a bit the frequency response, basically creating a different sounding channel.

How does it sound? Well, it sounds very good! Compared to the Sigma you can tell this one is modeled on a lower wattage amp: it's more high-mids oriented, which makes it a perfect djent amp (that's why for the sample I have been inspired in making some djent-ish riff), and the gain and attack are really great for modern metal, I would even dare to say that this is probably the best sounding modern metal/djent amp simulator I've ever played, even if it's good also at lower gain settings, being capable of pulling out also credible warm overdriven tones.
Plus, and this is the same also for Sigma, I must say that involving SeaCow Cabs has been a good choice: the impulse choice on these 2 amp simulators is better than ever, probably better than any previous Audio Assault product so far (even if I'm still particularly in love with one of their first ones, the Bulldozer).

Songwriting tips: how to write a good song - part 2/3 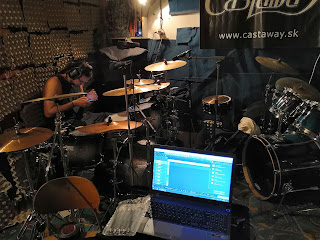 
So far I have assumed we're writing a song based on the melody, but the inspiration can easily start also from the lyrics: in any case (unless we're writing an instrumental song), sooner or later we will have to focus on whatever the singer will have to sing, and this to some is the easiest part, while to others it can be excruciating.

Writing song lyrics is directly related to the comunication abilities of the songwriter: singing is like writing a poetry, it starts with the basic communication skills but it has much more freedom than writing a normal text, and it's one of those cases in which breaking the language rules is allowed.
Nevertheless writing EFFECTIVE lyrics it's an art that it's been refined since literally millennia, and through the time the artists have developed some good common practices that can still today be used successfully: click here to read 6 tips to write better song lyrics.

Another staple of a song is the riff.
When we hear the word riff the first thing that may come into our mind is usually a classic rock riff, like an AC/DC one, and without any doubt rock, metal, punk etc are all riff based types of music in which the guitar plays a part that repeats and on top of which the lyrics are built, but we can say riff by extension also when talking about other genres of music, for example electronic music or rap, referring to the part of the base which repeats (sometimes it's directly a percussion loop).
Nailing the "riff" is fundamental, because this part will probably repeat in the song much more often than any vocal part, therefore it needs to be cool, fresh and not annoying to the ear.
If you want to know what I mean, check out the 10 best Rock/Metal riffs of all times.

Until now we have talked about "writing" in an ample way, but how do we actually put down the music we're working on?
There are basically 3 ways:
1) by recording it (click here to learn how to record a song).
2) by using musical notation, which means using the classic music sheets with staff.
3) by using tablatures.

A tablature is a way of writing music on paper (or also in MIDI if we're using a computer) which replicates the fretboard of a guitar or a bass, so you can choose the number of strings and then you can write on each string which fret to press.
Written like this it sounds very limiting, but in the recent years music written with tablatures has become very popular, because it's easier than notation, and because with the use of modern softwares it's possible to write music accurately for any instrument and to export it also as MIDI, so you can read it and listen to it at the same time.
A free software that can be used to write tablatures is TUXGUITAR, click here for a dedicated article.

Email ThisBlogThis!Share to TwitterShare to FacebookShare to Pinterest
Labels: SONGWRITING

Hello and welcome to this week's article!
Today we're reviewing a new guitar amp simulator from Audio Assault, which has been released for free for a limited time to the subscribers of the mailing list, and now it's available for everyone (but it's paid now): the Sigma!

Sigma is a simulator of a modern high gain boutique head (judging by the name and the look I guess we're talking about one of the 2 Omega heads, the brand used by one of the Slipknot guitarists), a single channel head in which the gain knob goes literally from clean to very high gain, there is a 3 band eq section, presence (which regulates the high frequencies between 4000 and 7000hz), focus (which emphasizes low and high end), depth (which controls the low end resonance of the power amp section) and master.

In addition to that there is a boost function which adds a fixed setting tube screamer in front of the amp, a noise gate (with pre and post amp knobs) and an IR loader.

Aesthetically the plugin looks very nice, with a clean and minimal interface as I like, with the right amount of scheumorphism that doesn't get too much in the way of functionality (for example I have really enjoyed the fact that the booster is just a switch instead of dialing always the same setting in the stompbox interface), or the way the noisegate works: just one knob to choose the threshold for the the input and one for the "loop" of the amp.

How does it sound?
It sounds very good! A modern, american metal tone which has a lot of beef but also clarity, tightness and note definition, and it sounds so aggressive that is perfect for death metal and similar tones, but also for fat overdriven cleans, At The Gates style.

Also, SeaCow cabs did a great job offering a set 12 of cool, usable IRs which goes very well with this amp simulator and lets you achieve many different types of tone, but if you have some specific Impulse you use often, the IR loader of Sigma allows you to create a "list of favorite impulses" which lets you recall them quickly, instead of having to browse through thousands of folders, and I think this is a genius idea, and it's absurd that noone has ever thought about it until now.

- Noise Gate, In & Out Controls

Songwriting tips: how to write a good song - part 1/3 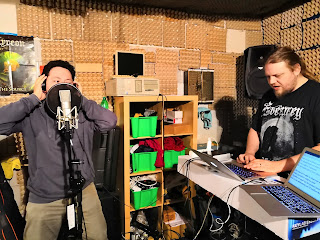 Today we start another of our omnicomprehensive articles for the "start from here" serie in which we will gather the best songrwiting articles written so far for this blog.

How to write a song?
Asked this way the question makes little sense, because all must start from the inspiration, from having something to say.
What this article is about is how to take an idea, a concept, a message of any kind (it doesn't have to be necessarily something too complex of phylosophic, it could be as straightforward as "I love you") and turn it into a song, analyzing some inspiration sources and giving some tip on to improve it and make it more effective.

Let's start from the basics: we need an idea. If you have stumbled upon this article, it means that probably this idea is not quite there yet, but don't worry: you just need to tune your antennas to the right frequencies to be able to hear in your inner ear some melody that does not exist yet, but that is already there, up in the air, waiting for someone to find it and turn it into actual music.
This is a theory that many artists believe (for example John Frusciante of Red Hot Chili Pepper): the one that the artist is just a "medium" that can hear or see something the others cannot and that his/her role is just to make material something that is already there in another plan, but whether you believe it or not, you need to get your ideas going, and not always this is easy: click here to read 5 ideas to make your music creativity running.

Now that you have some song stub, such as a chorus, a riff, some phrase for a verse, it's time to start putting together the pieces of the puzzle.
Building the structure of a song is an art that involves taste, a bit of knowledge of psychoacoustics, industry standards, hard choices and summarizing capability.
To find out how the songwriting professionists reason when putting together a song, check out this article with the most famous song structures in modern music.

Once we have a more or less stable structure that doesn't have boring parts, it's time to focus on what usually is the focal point of the song: the Chorus.
Usually the first part of the song before the chorus is a buildup, like a petting that grows of intensity until it reaches the climax, and if we want the climax to be memorable, the chorus needs to have something that stands out from the rest and remains in the mind of the listener, which could be lyrics, sound, a change in dynamics (the song is quiet and the chorus is loud or vice versa), or anything else: click here to read 5 songwriter tips to make your chorus more effective.