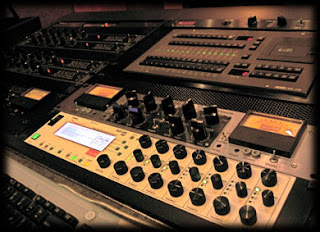 Hello! Today we're gonna see how to master a song, trying to analize the single steps in order to give to your (already mixed) track the final boost it needs to be loud and sparkling, enough to be compared to the commercial tracks.
Let's start from the assumption that the perfect mix just needs to have its volume raised to 0db on the mastering phase, but more than often other processes are needed in order to achieve a good final result.
Obviously there are many ways to build a mastering chain, as always I'm gonna explain you the basics and suggest some free plugins, then you will adapt these ideas to your project and your plugins.

- First off, load the track containing your mix on a stereo track, on a new project, making sure it isn't too loud (I would recommend to keep the mix it around -10db, to give you enough headroom to work in the mastering phase), in order to avoid clipping; it is also importanto to make sure the track is cleaned of all hiss, pop, crackle and noise before stating to master it, or the problems will get worse.


- The first plugin to add to our buss is an equalizer (for example ReaEq), if you feel there's some frequency to correct; that way you'll be able to shape (very lightly) some general frequencies that doesn't satisfy you completely after the mixing phase, usually eq is used in mastering in order to scoop very lightly the mids (more or less -1db around 300hz), and boost gently lows and highs (+1db around 50hz and 5000hz), but actually the best way to eq during mastering is by using a Mid/Side equalizer, the way described here. After these adjustments, using the same eq plugin, create a high pass filter to remove all of the frequencies under the 30hz, in order to clean the mix of the almost inaudible and useless frequencies, like rumble and breath.

- If we feel that the final sound is still a little bit thin and dry, and we didn't use a lot of Reverb during the Mixing phase, we can also try adding some Mastering Reverb. It consists into adding a Reverb with very low settings, a regular "Room Size", a low Wet/Dry ratio and a Low Pass and High Pass filter between 100 and around 2000hz. It's very important to not overdo, though, since this can really screw up everything :) The position in the Chain is Typically between the Equalizer and the Compressor, but it can be moved after the Compressor if we feel that the Comp is making the effect too strong.

- Now we must focus on the different areas of the mix, and try to point out if there are certain parts (for example, the drum snare) which are too low, or others (for example, the cymbals) too loud, and try to correct the problem; you can do it with the eq, like on the last point, or use this other method, that is less invasive and "coloring", which is the multiband compression (Click Here for an in-depht article on the topic).
There are many multiband compressors around, and there are some bundled in almost every DAW on the market, but if you need a freeware one, here is a list where you can choose from. Using a multiband compressor lets you choose graphically which part of the curve (i.e. only the highs on a certain frequency) to compress, leaving the other frequencies of the mix unprocessed, and it's a very useful tool to make aimed corrections.

- Now we can add to our mastering buss a Tape Saturation plugin, that produces a slight Compression and Saturation without squashing too much the overall sound, but this depends mainly by the song and by how much compression you have already applied on the single instruments and on the Mixing Buss. Alternatively we can use an Harmonic Exciter, in order to give some sparkle to the high frequencies, and some thump to the lows.