Everything you need to know about drum triggers PART 1/2 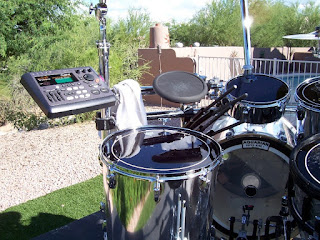 Hello everyone and welcome to this week's article!
Today we are going to talk about a topic very sensitive among drummers: drum triggers!

Why did I say this topic is sensitive among drummers? Because a drum trigger is a tool that takes a drum hit and turns it into a Midi impulse and sends it to a drum module (or to a computer with a drum VstI), so that we can replace the original drum sound with a pre recorded drum sample or with any other sound we want, and being Midi we can also quantize and manipulate the impulse in everywhich way possible.

Drum triggers started to be popular thanks to heavy metal music in the early '90s (especially with bands like Pantera), a moment in time in which music productions demanded more and more clarity, especially to make the super fast kick drum parts pop out of a dense mix with a lot of snap.
For these parts a normal microphone didn't seem to be enough, so the producers started to trigger the kick and replace the original sound with a very clicky one, capable of cut through everything and be very audible.
With time the bands started to use triggers for all drum parts for reasons that went also beyond the sound: to make drum editing way easier, and to even out the dynamics; today, especially in pop, rock and heavy metal is quite hard to hear a totally acoustic drum sound, as most of the songs features samples or a blend between samples and the acoustic sound (to make the sound a bit more natural).

This led to the paradox that often we can hear in an album an extremely complex drum part played perfectly, and then when we go to see the band live we realize the drummer would never be able to play it the same way it appears on the record.
This lack of "humanity" in modern day drums is perceived similarly to the "loudness war": since everyone is editing and quantizing the hell out of their drum tracks, the listener's ear is by now used to that super perfect performance, and the bands that does not edit and quantize to perfection will sound like the drummer performance is sloppy, and nobody wants to sound sloppy.
This led to an odd detachment between the record performance and the live one for most of the bands, as anyone can notice going to a live gig.

Going back to the main topic, a drum trigger comes usually in the form of a clip that gets attached to each drum part except the cymbals (but if we want we can trigger also just the kick, or only snare and kick and so on), then the trigger is connected to a drum module with normal jacks, and the drum module will interpret the signals received from the trigger and apply a pre recorded sample to the hits.
The "replaced" drum sound will then be sent via the output jack to the mixer and it can be used both live or in a recording session.