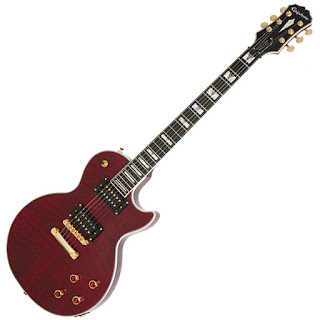 Hello and welcome to this week's article!
Today we're going to check out one of the top-tier Epiphone Les Paul models, if not the best on the market: the Epiphone Prophecy Les Paul Custom Gx.

This guitar can be seen and heard in several videos in our blog, like in the Orange Jim Root Terror review or the Harley Benton Sg Kit review.

This model is a Les Paul model with some unique features that sets it aside from most of the others, and that gives the instrument a modern twist, making it more suitable and comfortable also for shredding, especially with the neck thinner than the other models (Speedtaper D satin finish), 24 frets instead of 22 and radius 14" instead of 12".
All these features makes it very comfortable, without compromising the classic Les Paul feeling, also because the scale is the usual one (plus the body is full, no weight relief, for better sustain and resonance).

Besides the neck particularity, this guitar comes featuring top notch components, which are not very common in other models of the brand:

Basically they did all the most common upgrades that people do to a low price Epiphone, so the guitar is basically ready to go (and obviously this reflects also on the final price, which is usually 200 or 300 dollars higher than most of the other Les Paul models of the roster, so its price is around 7/800 dollars but these money are well invested).

Aestethically speaking the guitar is very nice, both in its passive and active pickup version: the top is quilted maple and comes in several colours (heritage cherry burst, black cherry, midnight sapphire and midnight ebony), white binding in body and neck, and pearloid inlays.

The guitar feels good to play, the neck is slighly thinner than the other Les Pauls, although not as thin as an Ibanez obviously, and the weight is around 4kgs, which is not light (the average for electric guitars is around 3.5), but also not unbearable.

Tone wise the Gibson Usa 490r and 498t pickups are a guarantee, they are among the best hi gain pickups ever made and their screaming highs are well counterbalanced by the dark sounding, heavy mahogany of the body.

All around this is one of the best guitar Epiphone has ever made, both in its passive and active pickup configuration (there is also a version with Emgs), and the price bump compared to the others is well balanced by the specs, considering that in order to buy all the upgraded components and having someone to install them on a guitar would be even more expensive, and the modded guitar would lose value in the market. This is also one of the examples of why Epiphone (which was acquired by Gibson in the 70s, although as a brand it is older than Gibson itself) is growing while Gibson is dangerously declining: it offers good quality at the right price, and the public is noticing it.