Is there any room for innovation in overdrive pedals? 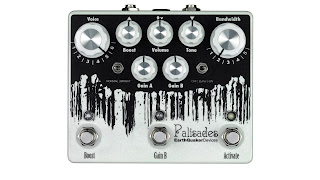 Hello everyone and welcome to this week's article!
Today we're talking about Overdrives (Click here for a dedicated article)! Our good friend Edoardo Del Principe is sharing with us his opinion about the evolution of these amazing stompboxes.

Overdrive pedals are some of the most common kind of stompboxes you can find on the market. Since the 60’s thousands of players have used them to push their amps over their limits, but since then how far has the innovation of these tools gone? Since the early models, the Boss OD1 and Ibanez Tube Screamer (Click here for a dedicated article), the world has changed really quickly in the pedal industry, adding more and more types of effect, but Overdrive seem like stuck not far from its archetype. Independent modders have customized the two “Adam and Eve” of OD in various ways, and some of them has also achieved a certain popularity, like Robert Keeley and his famous mods that are today a “golden standard”. We can therefore say that of course the first models are being improved with constant upgrading on the circuit but they are still what essentially they are, and OD pedals do their job only in one way: with volume, gain and tone knobs.
Most of the changes you can do about these pedals are on their gain section: you can change diodes to have a softer (Blues Driver) or harder clipping (Klon pedals) and it’s all there. Of course you can change parts to cut mids or bass frequencies if you need a more sparkly sound, but in the very end most players who choose an OD look at the volume obtainable with as less clipping as possible. Someone calls them “transparent” overdrive, and there are specific pedals labeled like that, but in general most of the OD out there can be pretty “transparent”. When you heard or read this word the producer means that you are not adding gain to your sound but just pushing frequencies and volume. So at a certain point people started making booster pedals which are essentially a simplify version of an Overdrive with a lot of volume, high-mids and less gain. Essentially the tone quest of the last 15 years about OD pedals was in their transparency and how much volume and what frequencies they would push, because amplifiers now can give you all the hard clipping you can possibly need, so what you add with your pedal is just the icing on the cake.

What described until now is a static world, a formula so perfect that has been only improved but never changed, even in its aesthetics. You can recognize an OD pedal just watching the scheme of the knobs because 99% of them come from boss OD1 and Ibanez TS.

So now let’s try to answer the question: in overdrive pedals there is no innovation, and probably there will never be, because the formula is already perfect at its essence. If you add too much clipping it becomes a distortion pedal, if you take away clipping it becomes a booster, so overdrive pedals are stuck in between the two categories and you can barely change something without changing the essence of the pedal.

Ibanez is now trying to sell its new TS at 280 euros ,because it has a small “nutube” inside the pedal, and in my opinion it’s crazy. For around that price Boss released a new Blues Driver

with JHS, and independent company who makes an modded version of the BD called “angry charlie”, so, essentially you have the original and its mod in one box.

Is there an OD who is worth all that money? Probably no. The schematics of an OD are so simple that there are literally hundreds of copies for a 1/3 of the price I mentioned, as good as the originals. Every pedal company has its own overdrive and each one is somehow still an overdrive at the end of the day, you can like more an OCD instead a Klon, a TS instead a SD1 but what you are searching is the same stuff you can find in the other variants. Well known guitar players used for their tours standard OD pedals as Brent Hinds and Ben Kelliher from Mastodon, Mario Camarena

from Chon (yes, that stupid mini TS) and many others so, if you find a used OD for 50 euros it can probably be as good for you as one for double the price.

Is there a little bit of innovation? Someone tried, as Earthquaker Dives to give to player every possible voice you need with the Palisades Overdrive. Buy one OD to rule them all. Wren and Cuff, a small company famous for their version of common pedals from bigger companies, is coming with a new 25-volt-overdrive.

The final weapon for the ones who miss a bit of headroom in their amp.

Every producer has tried to put on the market some good stuff, many failed, few succeded. OD pedals are the sharks of guitar effects, so perfect that they didn’t evolve so much in centuries.

Email ThisBlogThis!Share to TwitterShare to FacebookShare to Pinterest
Labels: GUITAR