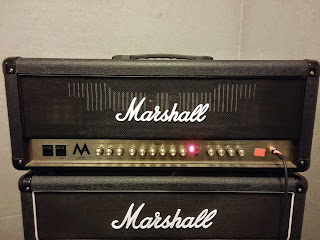 Hello and welcome to this week's article!
Today we're going to talk about an amplifier, the Marshall MA50H head.
This head is a 50w all tube, made in China, which sets itself in the lowest price area of the Marshall tube amp catalog, with a price as low as around 300€ in Europe.

A Marshall all tube amp for 300€? This would be more than enough for many people to be attracted by it, but as we will see, there is a catch.

This amp, compared with the others of the Marshall lineup, it's one of the very few that looks and feels when playing very cheap, and in my opinion probably not up to the Marshall standard.
First off aestethically, to give the impression that the tubes are lit and working there is actually a red LED hidden near them, which is really a cheap workaround, but beside that, the tone has been the biggest letdown.

The amp volume is decent, not particularly loud but enough to be heard, it's the tone itself that it's thin, and sometimes gives the impression we're not dealing with a tube amp: there is not much "thickness", nor much harmonic richness, and overall the amp sounds cold and dull.
There are two channels, clean and overdrive, and the overdrive channel has a boost function and a "crunch balance" knob; the amp also features (as many other Marshall amps) a Reverb knob, Presence and Resonance.

Overall this head is usable, the tone character is in line with the typical Marshall sound, but everything sounds colder and thinner, so our suggestion is to try it before buying it, and also to try other amps which are in the same price range, as for example the Peavey Valveking, which under many points of view sounds better and less cheap, always using real tubes.