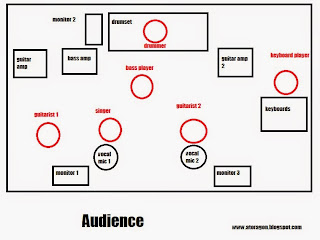 Hello and welcome to this week's article!
This is the first part of a tutorial in which we will analyze the bases to mix a live rock/metal band, on a small venue (200-300 peope audience): basically the average small live gig.

The idea of this tutorial came into my mind watching so many gigs in which the bands rented the p.a. system (public address system, which is the system composed by a mixer, microphones, loudspeakers and so on) and tried to set it up without a clue of what they were doing, and not wanting to hire a live sound engineer for the night.
The result is usually a mess: the band doesn't hear itself and plays bad, the audience doesn't understand a thing and eventually everyone gets scorned.

Please note that this is not a super comprehensive guide, and the most expert live engineers will notice something that may diverge from their workflow, but I just wanted to give the bases in the easiest and most understandable way possible, to get a decent sound live.

Ok, let's start with a description of the average cheap p.a. that can be rented and that we will use for our example.

So in this first part of the guide we will talk about SETTING UP THE STAGE.
Obviously microphoning a live stage is a simplified version of microphoning instruments for the studio (for example a drumset or a guitar amp):
the first thing obviously is to have clear in mind how the disposition of the musicians and the instruments, amps, cabinets, microphones and monitors should be (and the image on the top of this article is a standard stage-plan, with the position of everything on the stage, and for this serie of articles we will use that as "standard disposition").
Of course to set up the stage we will have to position the drumset if possible on the center, moved to the back, the microphones in the part of the stage closest to the audience, and the other amplifiers (and the keyboard) on the sides.
The monitors (in this case 3), should be set in a position in which they can be heard from 2 or 3 musicians, so we can set them like depicted on the stage plan, maybe turned a little towards the singer, if needed. A third monitor should be used only for the drummer, and in our example we have put it on the side of the drumset.

Once we have decided where everything should be, it's time to plug in all the amplifiers, to check out if we have enough electric plugs for everything, and then we can start microphoning everything.
For the drums, we have 5 channels available, and we will use them for:
- kick
- snare
- tom 1
- tom 2
- floor tom
Notice that we are not microphoning the cymbals, because in the small venues they are clearly audible even without microphoning, the bleed on the other drum microphones is sufficient.
Often drum microphones comes in a suitcase with clips to fix them right into the drum shells.

Now we will use 2 microphones for the 2 vocalists, then 2 microphones for the guitar amps.
To find the right position of the microphone towards the speaker, check out our guitar microphoning guide.
For the bass, often we won't have to microphone the amplifier, because many bass amps has a "mixer out" or "d.i." out, which is made to go straight to the mixer, so we will connect it from that out to our channel box.

Finally, the last two channels are reserved to the d.i. boxes, on which we can connect a keyboard (with the left and right outputs), or a computer, or an mp3 player with some pre-recorded base, or some other instrument that we need to amplify, or if we don't need them, we can just leave them alone.

We should write down exactly what xlr jack goes into the channel box (for example channel 1: kick drum, channel 2: snare drum, and so on), so that we will have the perfect control on everything when mixing.