HOW TO USE SIDECHAIN COMPRESSION (free Vst Plugins included) 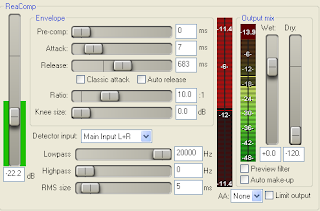 Hello and welcome to this week's article! Today we're going to talk about an advanced compression technique called "Sidechain Compression", which is widely used in productions that span from extreme metal music to dubstep. To take a look to the Basics of Compression, CLICK HERE.

Sidechain Compression is a technique that consinsts into putting a compressor on a sound (usually the kick), that when is triggered, it applies the compression on another sound (usually the bass, or the synth on dance music), instead of affecting the kick itself;
the aim is to obtain a "pumping" drum sound, almost as the bass is part of the release of the kick itself (therefore largely increasing the groove), and avoids at the same time certain frequencies of the bass to cover the same frequencies of the drum kick, leaving it as much clear and audible as possible.
Let's focus on its most common use, for rock-heavy metal music, and once you've learned how it works, you can try it on more creative ways.

Now load the compressor on your Bass track and activate the "sidechain" control (for example, in Nuendo, it's an orange button on the top left of the effect window, if you lay the cursor on it without clicking it will say "Activate Side-Chain"). Once this control is active, open the kick track and find the "Audio Sends" menu. By clicking on one of the empty slots, it will make you choose the buss where to send your Input, and choose "Sidechains - Reacomp", or whatever  is the compressor you've loaded on your bass track. After you chose, set the "Send Level" to 0.00 db.
Now, by playing the two tracks together, you will notice how the kick will cut through the bass sound much clearer, and the more you will lower the "Threshold" control, the more the bass volume will be lowered when the compressor activates (the ideal would be that when the kick hits, the bass is lowered of around -7db).
The attack time should be set pretty fast, according to the music genre, and so the release time, that may vary orientatively from 250ms to 500.