What is MIDI? a guide for dummies 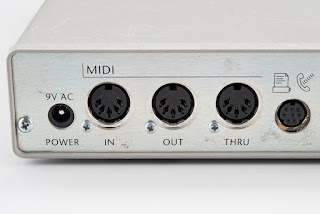 Hello and welcome to this week's article!
I have realized that during those years we have been talking a lot about MIDI, but we have actually never made an article with a brief explaination of what it is: here it is.

First off: MIDI is an acronym: it stands for MUSICAL INSTRUMENT DIGITAL INTERFACE, and it is the standard protocol for interaction between electronic music instruments, and between them and a computer.
This standard was created in the '80, but somehow it got so popular and widespread that still today it's the standard for electronic instruments (and not only, also for routing the signals and creating patches that controls also analog devices, through a dedicated hardware, or for controlling lights in a concert etc.).
Some of the biggest perks of this protocol that granted such a long lasting success are in facts the reliability, the lightweight of the data and the low production costs, that allows every hardware and software producer to work with it, also because it's supported by an infinity of freeware tools.

So the basic concept here is that MIDI is a Standard: no other standard has been able to replace it so far (even if the technology has advanced and in theory Midi could have been improved in several ways), and at the beginning in the early 80s there has also been a sort of a war similar to the Vhs vs Betamax one, but the Midi standard got the upper hand and was adopted by the majority of music instrument producers (Yamaha, Roland, Kawai and so on).

Without the need of getting too technical the connection is a 5 poles DIN cable, which was commonly used in the early 80s, only 3 of which are actually used by the Midi, and these cables are able to connect to the serial ports in 3 ways: In (to send the signal to a Midi device), Out (to send out the informations), Thru (to allow the device to send its signal to the In port of another Midi device).

The Midi data that flows through these ports contain the informations that must be received from a device like a Synth, a Sampler or a Sequencer, which can be hardware (for example an electronic keyboard or a synth) or software (a computer), and the information is contained in a Midi File, a file that supports up to 16 channels (meaning that can send at the same time notes that can be played for example by up to 16 virtual instruments at the same time). Modern Daws can play hundreds of Midi tracks at the same time, using as many virtual instruments as the computer can support, leading to an infinite amount of sound possibilities that until few years ago was unimaginable.
A Midi file can also send for example the lyrics of a song synchronized with a music, and it is a standard widely used also for Karaoke, or it can be used to control the lights in a concert.

A Midi can be played in real time through a Midi controller (for example a keyboard), or it can be written in a Daw via a notation software (the best Daws allows also to manipulate it modifying the variables from a minimum value of 1 to a maximum of 127, creating automations and articulations), or it can also be programmed in a sequencer.

For more informations about the Midi standard you can visit the official website Midi.org, which has an infinity of resources for those who want to go more technical or in general to have more knowledge about this formidable tool.

Email ThisBlogThis!Share to TwitterShare to FacebookShare to Pinterest
Labels: MIDI