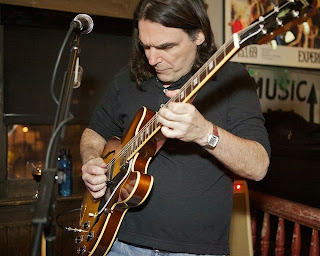 Bob Miller is an American Musician, singer and guitarist for the band Nimrod Wildfire, among many other projects; his influences are, according to his website Villamilla.com, electric blues and Stax soul, 50′s rock & roll and doo wop, good pop songwriters, 60′s soul, Motown, funk, New Orleans piano, zydeco, country, jazz and latin.


GuitarNerdingBlog: Hello Bob and welcome to Atoragon's Guitar Nerding Blog! Introduce yourself to our readers, tell us your story!

BobMiller: I saw the Beatles on the Ed Sullivan show in 1964 and knew what I wanted to do with my life. It took me another five years to get a real guitar, but within a year I had my first band together. I had to teach the bassist and other guitarist their parts, but we had a great drummer. I was lucky enough to live in London by that time, so I came of age in a very demanding but collegial atmosphere. It was the golden age of pub bands, and my last UK band played some great gigs. I moved back to the States to go to Berklee and found a very discouraging scene in Boston, so after a couple of years I got serious about a day job and wound up running my own software business. Interestingly enough, most of the people I knew at Berklee became programmers. At any rate, I sold that business about five years ago to devote myself to writing, recording and performing my own music. I think the world still needs music that says something and I think I've got something to say.


GNB: Tell us about your career. By visiting your websites ( http://www.nimrodwildfire.com/ and http://www.bluemuze.com ) it appears that you've already had an interesting career, taking part as both studio and live musician in different projects.
Which are the ones that you consider your career highlights? Which are the artists that influenced you the most? Is there still some collaboration that you'd wish to do?

BM: I did some session work in London and loved it. I drove to Rockfield Studios in Wales once, sitting on my amp in the back of a Ford Transit van. I thought I had really arrived at that point. Gigs at the Northern Counties were great. Lately I've played some big festivals in this area. Any time the sound is good, the band is good and the people are appreciative it's pure joy for me. Likewise working on my last CD was great - both working on rhythm tracks with the rest of the band or working out a solo or vocal in my home studio.

I have pictures of Duane Allman, Ry Cooder, Richard Thompson, Ralph Wash, Lowell George and Django Reinhardt on the wall in my studio. They're the guitarists that have most inspired me. As a songwriter, which is more and more how I see myself, I like Nick Lowe, Graham Parsons, Jackson Browne and John Hiatt. There are so many more though! I listen to a very wide range of music. I'm one of the few people I know who thinks that Chuck Berry was a brilliant lyricist.


GNB: I've heard that you are a guitar lover and that you build your own instuments! Tell us about your love for this instrument and about your favourite models, as well as your creations!
BM: To be honest, it's mostly that I'm demanding but cheap. I can't afford vintage instruments, and having watched a cymbal fall and cut a gouge in my guitar on a gig, I'd really worry about gigging with something irreplaceable. I find that between Warmoth, Seymour Duncan and Joe Barden I can put together a really great Fender style guitar for a lot less than it would cost to buy the real thing and then switch out half the parts. I build my own amps too, for the same reason. My favorite is a recreation of the 1964 Vibroverb. I took a good year to design and build but it's a really unique sound.

I suppose I'm not terribly romantic about guitars. They're tools, but I've always loved tools! I tinker with everything. I have a few Gibsons and I don't think any of them has the original pickups or electronics. I just want them to play well and sound good, and I really hate hum, so they're well grounded and shielded.


GNB: What do you think about the state of the music business? What are your thoughts about today's underground and mainstream music scene?

BM: When I was at Berklee in the late seventies the word was that the music business was nothing like it had been five years earlier and it's continued to get worse. I think the problem is that as a society we don't really value creativity. It's not just the music business - nobody gets paid for Ted Talks either. I think our values as a society are really upside down. I'm speaking mostly of the States, since that's where I live, but I think this has happened throughout the western world. I think you get what you pay for and I really worry about the culture we're creating.


GNB: What do you think about the digital music distribution? And what about the file sharing? How do you think the music business will evolve in the future?

BM: As I say, I think the problem is more societal than technological, but certainly as music is currently distributed and consumed it is hardly viable to live as a creative musician today. I believe, and I see constant evidence, that there is a hunger for the kind of passionate, genuine music that I fell in love with as a kid. I believe therefore that things will change in such a way that such music will be created and the creators rewarded. Right now I really have no idea how that will happen, but the reason I'm doing this now is that I want to be part of it.


GNB: Let's talk about live music! Which have been the best gigs you have ever played? Do you consider yourself more a live musician or a studio one?

BM: I love them both. The two gigs that come to mind are a very hot, sweaty night on a tiny stage in a packed club with a blues band, and a beautiful outdoor gig on a large stage. So the thing really is as I mentioned earlier - good sound, good players and an appreciative audience. Everything else is peripheral. 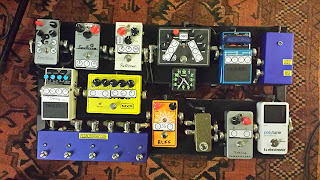 GNB: Tell us some funny story: which one has been your best/funniest experience as a musician? And your worst one?

BM: It's only funny looking back on it, but I was in one band where I'd have to go find the bassist and lead singer after every break. I would wander the streets around the gig looking for a car with a copious cloud of smoke inside and knock on the window. Programmers aren't easy to manage but I never had to do that in the software business.
The worst of it is putting myself out there and not getting a response. Sending out CD's to the wrong radio stations or nagging people for a gig only to have them offer dates I can't do. I've been in some pretty dicey musical situations but no matter how bad it gets, playing music is the good part.


GNB:  Since many readers or our blog are interested mainly in the tecnical side of the guitar world, can you tell us your studio and live equipment? Can you tell us about the recordings of your latest album?

BM: We did the rhythm tracks for Corporate Refugee in London, with Jim Kimberley and Matt Backer, who played those pub gigs with me so long ago. Then I came back and layered keys, vocals and guitar at my leisure. My studio here is digital - I use Sonar, Reaper and ProTools at various times. I get sick of the shortcomings of one and then switch to the next for a while. Guitar never goes direct - I go through an amp and mic it. I'm a fan of Oktava microphones, modified by Mike Joly. Other than that it's pretty standard stuff - Shure, AKG.
My daily amp is an Allen Accomplice and there's not much you can't do with it. It's based on the blackface Deluxe Reverb but you can put 6L6 tubes in it for a little more volume and clarity. You can dial the tone stack in or out and get a nice tweed sound out of it. And it's not too heavy. In London we used to lug around a Hammond B3 and a Leslie, in addition to the Marshall 4x12's. No more!

I have a big Pedaltrain board and a small Pedaltrain board. For distortion I use Keeley OCD's, TS808 Tube Screamers, and a Zen Drive. I have a Keeley compressor and an MXR, and I use the MXR envelope filter instead of a pedal because I generally have enough to worry about without bringing my foot into the equation. I control them all with a microprocessor based loop controller that I built myself. It's kind of like the Carl Martin Octa-Switch but much smaller. I had the Octa-Switch and it worked great, but there wasn't much room for the pedals!

I also use various preamp pedals just to compensate for the different output and tone of different guitars. I don't want to have to fiddle with my amp when I switch, so everything is preset. Likewise, especially since I'm the lead singer as well, everything on the pedals is preset and I just have four loops to choose from, with a couple of effects that will be on or off depending on the song. I make it as simple as I can and I still mess up from time to time.

GNB: Is there any advice that you'd like to tell to our fellow guitar players?

BM: This probably isn't what you want to hear, but I always think of a story I heard about Eric Clapton plugging a borrowed guitar into a cheap transistor amplifier. He plunked a few notes, turned a couple of knobs, and sounded just like Eric Clapton. The passion in your heart and the feel in your fingers is 98 percent of it. I love all the gear, but you've got to keep it in perspective.

GNB: What does the lyrics of your songs talk about? Do you think that on a song it's most important the lyrical side or the musical one?

I learned a lot more from Muddy Waters than my school teachers when I was growing up. I've had a pretty interesting life, had some great times and made some big mistakes. That's what my songs are about, and I'm hoping somebody will learn from them as I did from Muddy Waters. If you're putting lyrics to music then they're really inseparable. It's like asking whether treble is more important than bass. I try to create a compelling whole.

GNB: The interview is over! Tell us about your latest album, projects and tours! Thank you very much and we hope to see you soon live!

BM: I'm writing the songs for the next Nimrod Wildfire CD at the moment. Gigs are infrequent in this area, but we play out as much as we can. I've spent a lot of very happy time in Italy and I would love for you to see me live too!

Email ThisBlogThis!Share to TwitterShare to FacebookShare to Pinterest
Labels: INTERVIEWS