BIT DEPTH and SAMPLE RATE! a guide for dummies 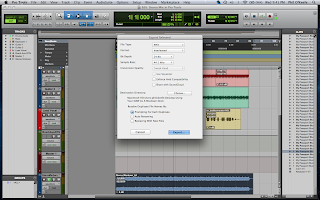 Hello and welcome to this week's article!
Today we continue with the technical stuff made easy, and we're going to find out what are and how to use the Bit Depth and the Sample rate.

First off: why do we need them?
Because we need to choose the right setting before starting to record our tracks: the different settings will affect the dimension of each recorded track, its characteristics and the cpu usage of the project itself, so we must find the right compromise between quality and usability, especially when it comes to large projects.
The types of bit depth and sample rate availabe is variable according to the type of Audio Interface, and can reach 24bit and 192khz (as a maximum), but if an audio cd, an mp3 or a Youtube video can read only files at 16bit and 44.1khz, why do we need to record at settings so different?
The idea behind the availability of those settings is that we can record at the maximum fidelity possible, and then Dither the signal down to the standard format, obtaining a result that can be better than recording straight in the cd format.

- Bit Depth: why does people record usually al 24 bit? Because Bits are all about headroom: with 24 bits we're allowed to record hotter signals without the risk of clipping, or to record normal signals with a much quieter "noise floor".
In facts, in the analog era, it was important to record with as much signal as possible before clipping, because that way there was much signal emerging from the noise floor, which was quite high; in the digital domain, especially with 24 bit interfaces, the noise floor is so low that we can perfectly record with conservative levels without risking anything.
Sometimes the DAW offers the opportunity to record at 32 bit, but since 99% of audio interfaces in the market can record at a maximum of 24 bit, this feature should not be used.

- Sample rate: to understand this parameter, think about the frames of a movie. If a movie is 24 frames per second it's good, if it's 60fps it's much more fluid.
Sample rate does a similar thing for the audio section: it controls how many snapshots of an audio wave are taken in a second.
The reality is that 44.1khz are enough to represent well basically any musical style, so unless we have some particular need that forces us to use different settings, 44.1khz it's perfect, and at the same time it doesn't weight too much both on our Cpu and hard drive.
Obviously if you want to record your album at higher sample rates feel free to experiment, and if you want, let us know the differences you've noticed!

Our suggestion for a project is to record at 24bit and 44.1khz, that way there will be enough headroom and a great noise to signal ratio, and at the same time the project will not be too heavy on the cpu and hard drive.
Click here for a dedicated article about why recording at a too high sample rate can be even detrimental to our project.