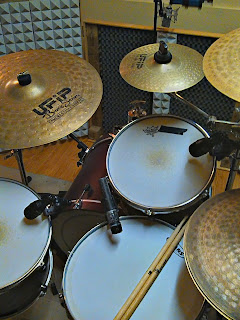 Hello and welcome to this week's article!
Finally here we are, on the toughest of all recording topics: how to mic a drumset!
Let's start by saying that there isn't just one good way to do it, there are many ways that can be discovered on the various studios, and the philosophy varies according to the music genre, the room treatment, the number and the brand of microphones used and so on.
In the beginning the first recording were made with just one Condenser Microphone in the middle of the rooms, and all instruments were tracked with the whole band playing, then with the perfectioning of the recording techniques, audio engineers felt the need to increase more and more the separation among the single instruments, in order to be able to mix them individually and obtain different tones without modifying the other tracks.
The most common microphoning technique today consists into tracking every drum piece with a microphone or two, and the cymbals divided in groups (Click Here for a dedicated article about How to record and Mix Cymbals), and before getting started we really recommend you to do some acoustic treatment to your room, for example placing some absorption panel around the set to avoid unwanted resonances, and to TUNE your drumset in a coherent way.

If you have only 2 microphones and you need to mike a whole drumkit, use this technique.

Let's start with the Snare Drum: we need to microphone this one with a microphone that can capture its snap and brightness, such a Shure Sm57 (or Beta 57), and we should place it in the centre of the drumset (in Pic. 1 the snare is the one in the lower right, because the drummer was a leftie), as close as possible to the skin (but avoiding it to be touched even when the skin gets hit hard), pointing to the exact point where the drummer will hit.
Why are we placing it on the centre of the drumset? To put it as far as possible from the Hi-Hat (aka Charleston), that usually bleeds heavily in the snare microphone, and we need to avoid this as much as we can.
Now we will need a second Shure Sm57 to catch the sound of the Snare Wires on the bottom of the Snare: we'll just place it below the snare pointing up, and this will provide us some extra "splash" that if we'll mix carefully with the Snare Top sound will give us a very full and powerful result. 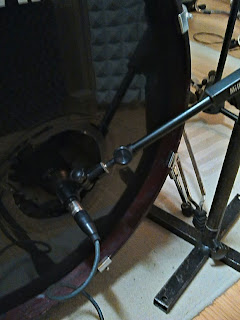 For the Kick Drum instead we will need a dedicated microphone that is particularly suited for tracking bass frequencies, and every brand has some model made for this task, for example the Sennheiser e602, but first it's a good rule to set a pillow or a blanket inside the Bass drum to reduce the resonance (we don't really need Mondo Bass). To microphone this drum part it's important to find the sweet spot that captures as many frequencies as possible: if we set it too "outside" the hole, it will sound excessively "bassy" and without attack, if we place it in too deep it will only take the "click" of the kick drum beater, so we'll need to find a halfway positioning that will reproduce everything as close as possible to the final sound that we have in mind (in our case, the right position was obviously the one shown in Pic. 2).
Sometimes may also be useful to place a Sub Kick near the hole, in order to capture some extra boom, or another microphone pointing to the kick beater to capture some extra attack, but in this case we were satisfied with the sound we obtained, with just one mike, so there was no need to use another preamp channel.