HOW TO CREATE TEMPLATES FOR YOUR DAW 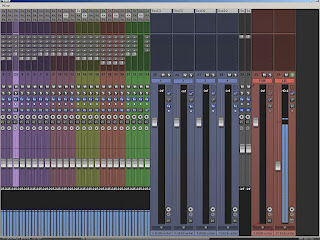 CLICK HERE TO READ THE FULL ARTICLE ABOUT PROJECT PREPARATION

The duty of a mix engineer is to do a better job with every single mix, improving, changing and experimenting new solutions every time, it's almost impossible to think about a perfectly stable way to work that will not be improved in the future...
...Nevertheless it's crucial, especially if we start mixing often and our schedule becomes more busy, to try to lose as less time as possible in the basic, repetitive tasks that has to be done on every mix, especially when it comes to organizing the project before starting the actual mix.
To create a template could be a time-saving idea, especially to create a complex template which already features the basic tracks organized the way we prefer, and routed on the right busses, with the basic plugins already loaded; this will help us focusing on the mixing task in a much faster and productive way.

Today most of commercial DAWs features some template with already some plugin loaded, in order to ease the workflow since the beginning (e.g. the latest versions of Cubase or Magix Samplitude lets you load a preset for a Rock project, with two guitar tracks with an amp simulator already loaded, a drum synth, a bass and a vocal track), but they are just for those who have no idea of how to begin a project from scratch, instead we need something a little more articulated and customized, so that's how we can arrange it:

1) by starting from a Minimal Project, that way we won't have to do tasks like create bunches of tracks just to get going, but we will need to decide which signal processors and instruments to add.

2) Starting from a template that has everything (virtual instruments, processors, fx busses), so we can choose from a huge number of options. We can then remove anything unneeded as the song progresses, which will also lighten the Cpu load.

Now, let's think about the Track Disposition: first off let's assign to every instrument a different colour in order to spot everything at glance; a common order for the tracks is: Drums, Bass, Guitars, Extra Instruments (such as Synths), Vocals. Name every track properly, for example "Rhythm Guitar Left", and so on, and if you feel you need it, you can also route some of these tracks on Group Tracks and FX busses.

Once we have loaded all the tracks we need, it's time for the last step: the Window Layouts. Almost all programs make it easy to create an arrangement of windows, then save that as a layout. This is particularly helpful with single-monitor setups, where it's impossible to put all the windows you want on screen at one time, thereby requiring some degree of “window-flipping”.
Creating the right layout is helpful especially in the mixing phase: when editing midi or recording  instruments, in facts, we need specific windows made for the task.
When mixing, instead, we can arrange a layout that incorporates on the same window the tracks and the mixer, which is crucial on the balancing phase, and very handy when it comes to loading-bypassing-editing effects. Once we have our layout on an optimal configuration, finally, it's time to save the project before importing and recording any track, in order to load it every time and spare ourself the loss of time of organizing the project, and to find a familiar layout that will make our workflow faster.

Email ThisBlogThis!Share to TwitterShare to FacebookShare to Pinterest
Labels: MIXING