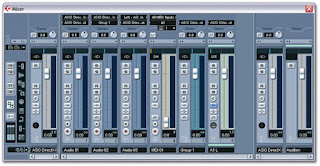 Hello and welcome to this week's tutorial! Today we're going to talk about how to use Group channel tracks and FX Channel tracks on your DAW.
We'll use as example the standard Cubase / Nuendo interface (two of the most commonly used DAWs),  but the same mechanism can be applied to almost every other DAW.
The idea is to avoid applying the same effects to every channel we need, thus losing time, cpu and ram usage, and to have a cleaner and easier-to-mix interface, by creating groups of channels that shares the same effects chain, using just a single effect instance, applied to more than one channel.

- Group Channel Tracks: just click to Project->Add Channel->Group Channel Track (stereo, if you're not going to route on it just mono instruments, or you wish to use stereo effects like the "ping pong" delay, or you want to pan the single stereo instruments on different positions), name it as you want (for example "Rhythm Guitars", or "Lead Vocals") and then select on the Output Routing of each channel you want to route into this Group channel track, the name of the Group Channel Track we've just created.
Now that we have all the desired tracks routed on our Group Channel Track, we will notice that if we Mute or Solo the Group channel track, all the single routed tracks will be affected, and the same will happen moving the volume fader, or creating Automations. Obviously on the "insert" section of this Group Channel we'll be able to put any effect, for example a reverb or a compressor, and it will be applied to all the tracks passing through this channel.
You can also route a Channel Group (i.e. cymbals) into another Channel Group (i.e. Whole Drumset), but only if the last channel group (i.e. Whole Drumset) is created for last; for some reason in facts, if you create a new channel group and try to send it into an older one, on some DAWs this will not be possible.

- Fx Channel Tracks: these tracks are not whole channels, but just simple effect chains (or FX buss) that can be sent to the "effects loop" (send/return) of all the single tracks we want, choosing the amount of it to be sent to each track (which can't be done with a Group Channel track). Let's click to Project->Add Channel->Fx Channel Track (stereo, for the same reason explained above). Let's name the track the way we want (i.e. Vocals), and this will create another Channel called Fx Channel, with all of the classic inserts, where we can load all the effects we need, for example a Reverb (but obviously we can choose more than just one effect).
Now, if we open the tracks we need to be effected, in this case our vocal tracks, we can load in the "Fx Sends" section the FX Channel Track we've just created.
In order to choose the amount of effect to be applied on this track, we will move the volume fader just below the slot in the "Fx Sends" section of the track; the orange button above the slot selects if this FX buss is applied Pre Fader or Post Fader. If it's On, the effect is post fader, so the amount of effect applied in not modified by the track fader: the effect is sent as the fader is always set on 0db.
Now we must send this FX track on the "FX send" slot of all the tracks we want it to be applied, and we're done :)

If you want to learn how we can use the insert of an FX channel track, click here!

- Additional Awesomeness - Linking Channels: From the Mixer Interface (just press F3), hold the Ctrl button and select more than one channel to have them selected at the same time, then right click on one on those and choose "Link Channels": from now if you Mute, Solo or change the volume on one channel, this will affect all the linked ones. If you want to modify just one of the linked channels without removing the link between them, you can do it by holding the Alt button, this way the change will affect only the select channel. In order to remove the link, just right click on one of the linked channels and choose "Unlink Channels".