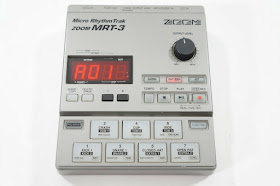 Today we're going to review another legacy product, which came out the same time as the Zoom MRS-4 (in 2003 click here to read the review): The Zoom MRT-3 Rhythmtrak.

This is a very portable MIDI drum sampler which can be powered either by batteries or by DC plug, and it offers 7 pressure-sensitive pads, 199 sounds and 396 patterns divided in many genres, from jazz to reggae, from hip hop to heavy metal.

Today all these drum modules/samplers are more or less computer based, meaning that they somehow offer a way to plug them to the pc to use also the computer samples, and they are used more as an interface to play in real time, since it is basically an instrument, but back then, when still not every studio had a PC, these sequencers were very popular because, as the name says, they would let you create loops with the integrated sounds (either by writing them or by playing them real time) and put them in sequence in order to create the song you needed, then they were synced via MIDI to the tempo of the song by connecting them to the audio workstation (or to a digital master clock, which was an external rack unit that would set the tempo for all the other devices connected).

Once all the sounds are chosen (either pre-made kits or custom ones, to which also the velocity can be adjusted), all the loops are selected and put in sequence, not only this device lets us play the song, but it let us also improvise in real time by playing with the pads during the playback, and our performance can be either recorded or not.

What to say about this device? I have never seen so much functions packed in such a small device, and back then it was quite a breakthrough (plus the samples were decent sounding and fit for every genre), but today it's quite useless due to the lack of connections with a pc (except the MIDI one), and because with DAWs these tools are used only to play with the samples in real time, all the other functions have become rather obsolete and clunky.

I wouldn't suggest to buy it today unless you're vintage lovers, but nevertheless thumbs up for the technological content back then, it was quite impressive.

Specs taken from the manual:

● 199 16 bit-48khz drum and percussion sounds, 396 preset patterns contain a wide variety of preprogrammed rhythms. 99 additional patterns can be programmed and stored by the user.

● Create a backing sequence (song) with up to 99 patterns. As many as 99 such songs can be stored for immediate use at any time.

● Internally lit pads let you follow the rhythm pattern visually during song playback or when using a pattern.
● Choose up to 14 sounds from the built-in drum and percussion sources, and then adjust level, tuning, and panning individually to create your very own drum kit.