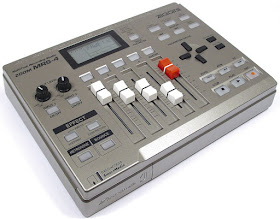 Today we're going to review another legacy product I have owned in the past, which has been a part of the early stages of my recording experience: the Zoom MRS-4.

MRS stood for Micro Recording Studio, and it was an extremely portable and lightweight recorder that hit the market in 2003, and that was storing the tracks in wave format into an sd card (unlike previous models which were recording on tape or buring the songs directly into a cd).

The premises (and promises) were as usual stellar: to be able to record your own songs directly in the rehearsal room, with 4 independent tracks at the time that could be bounced one to another (a practice that derives from the old tape recorders, in which you would merge two or more tracks into one in an irreversible manner), an array of digital effects and a metronome, all in a super small, battery powered package.

Unlike other more expensive all in one recorders of the time, this one did not come with a drum machine integrated (only a metronome), but you could connect to it another piece of hardware, a separate Zoom drum machine called MRT-3 Rhythmtrak, which would sync to the MRS-4 via MIDI.

How did it sould? Well, this has been a brief phase of my recording life (probably 6 months), and it has been replaced after not too long with a PC, because it had some serious limitation that today would be considered unconceivable, but that already back then were a red flag: the maximum recording quality was 32khz, somewhere between a tape and a cd, and there was no way to connect it to a pc (no USB etc), so the only way to export the files for further editing was via SD card.

Regarding the sheer sound quality, I must admit that it's also my fault, back then I wasn't able to nail a good gain staging, that's why probably in my tracks there was a lot of background noise, but more recently I have heard from someone who have used it with a bit more experience that the preamps and the recording quality were not that bad considered the price and the year it came out.

Together with the separate drum machine, this MRS-4 was the smallest way to record a small demotape or a rehearsal, even if the '90s style interface and the controls were all but intuitive and forced you to spend a lot of time in setting up everything, even if this unit, unlike a tape one, would allow you (with some struggle) to do also some editing to your tracks.

All in all it has been an interesting phase in my journey in home recording, (actually I was already using a PC and a DAW since the year 2000, but I wanted to try also one of these portable hardware consoles everyone were still talking about back then, before realizing they were not only less flexible but also less intuitive and more time consuming than a DAW), but after few months I've sold it and never looked back.

Specs taken from the manual:

- Simultaneous 4-track playback/2-track recording 8 virtual takes per track add up to a total of 32 takes available for recording.

- Flexible track parameter settings Hi/Lo EQ, effect send, and other parameters can be set individually for each track.