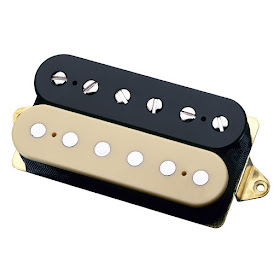 Hello and welcome to this week's article! Today we're going to talk about Humbucking Pickups!
As we've seen on our article about Single Coil Pickups (CLICK HERE for the dedicated article), those were the first magnets to be inserted on a guitar to pick the string vibrations, in order to send them to the amplifier, but with time, guitar players found that the single coil led to some noise problem, so manufacturers decided to create a pickup with two coils to "buck the hum": by connecting the coils in series and out of phase, the interference is significantly reduced via phase cancellation.
The result is a dramatic reduction of noise, but at the same time the sound is a little different: the output is averagely higher, the sound is fuller and has more bass frequencies; the classic Stratocaster sound with its bright, twangy frequencies is far, and with time this new way to conceive a guitar sound became more and more appealing, especially to the new rock musicians that were in search of a more aggressive guitar tone.

The "humbucking coil" was invented in 1934 by Electro-Voice, an American professional audio company, to prevent the hum generated by electro magnetic interferences, but the first actual implementation on a guitar was introduced by Gibson around 1955, on a Les Paul Model, with the PAF (patent applied for) pickup.
From there, the humbucker became basically the only pickup featured on Gibson guitars, in juxtaposition of Fender, that kept on relying to the Single Coil models, until the '80s.

Nowadays there are many kinds of humbucking pickups, capable of adapting to the different measures of a guitar bridge (click here to see the Pickups Size Chart), and made of the most different materials, in a constant research of an always better and harmonically rich tone.
Some pickups (as Emg) also features a battery-powered active circuitry, as explained on the Single Coils Article.
Here's the three most common materials pickup magnets are made of:

Ceramic: this material is used mainly for hi-gain (high output) pickups, since is said to add some compression to the final sound, and therefore to produce a more modern tone. A famous ceramic pickups manufacturer is Dimarzio (although, together with Seymour Duncan, they make any kind of pickup nowadays).

Alnico: this material is used to achieve a more vintage tone. Alnico comes in different forms: II, and V are the most common with guitar pickups, though III and IV are being used by some companies. Alnico II is the softest and most compressed sounding, while Alnico V is the one with the highest output of the group.
Some new pickups are using Alnico IX, which is even more powerful and bright. Many people feel that it offers the power of ceramic with some of the characteristics of Alnico. A typical producer of Alnico Pickups is Seymour Duncan.

Neodymium: this is a more recent kind of magnet, made with a very strong rare earth material. Is said to have a very flat, transparent and high gain response, and it's produced by very few manufacturers, like Q-Tuner.

There is also some very particular type of humbucker that worth mentioning:

Minihumbuckers: this is a particular type of humbuckers of reduced size, originally created by Epiphone, that sounds halfway between a single coil and an humbucker. Sometimes these pickups are so small that can fit on a Single Coil cavity (such as the Seymour Duncan Hot Rails).

Coil Splits:  some humbucker gives to the player the option to be "splitted", via an external control (a push-pull pot, or a toggle switch). To "split" a coil means to bypass one of the two coils, thus reducing the output and giving the sound of a Single Coil pickup, obviously retaining the original timbric characteristics of the pickup. A very particular kind of Coil Splitting is featured on some Washburn Guitar, and it is called VCC (voice contour control), which is a pot that allows the player to change between one and two coils, with all the positions in between.

CLICK HERE FOR AN ARTICLE ABOUT THE BEST HUMBUCKING PICKUPS CHOSEN BY GNB!